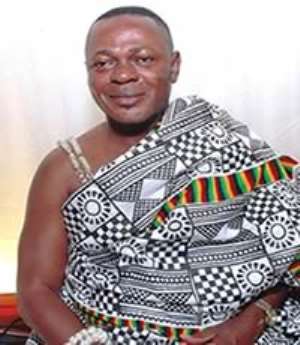 The rift that has recently plague the Asanteman Association of New York in recent times and deeply divided the once vibrant organization into factions has finally been laid to rest without a drama when Nana Adusei Ampem pronounced that Nana Tieku Acheampong's stewardship of six months given to him from June 1st, 2019 should end on the December 1st, 2019 and hand over to the newly elected Asantefuohene of New York Nana Attakora Amaniapong did not go well with some braggarts supporters of the outgoing chief led by one Kwabena Amakye who protested vehemently with insulting words, later on, storm out from the make or break meeting angrily.

However, the notorious Kwabena Amakye's unguided behavior could not change the resolute discretion of Otumfour Osei Tutu's special envoy.

It took the invention of Nana Adusei Atwenewa Ampem, Omanhene of Tepa Traditional Area being His Royal Otumfuo Nana Osei Tutu II, King of the Ashanti Empire emissary to the diaspora.

After serving his term as Asantefuohene of New York Nana Tieku Acheampong refused to give way for elections to be held to select his replacement.

Due to that, a faction within the association decided to extend his reign beyond the stipulated period.

The decision was frowned upon by the majority of the leaders of the association so they resorted to a court action to prevent Nana Tieku from holding on to power beyond his term contrary to the dictates of their constitution.

The issue was referred back to the elders by the court for their constitution to be clarified.

Some prominent members of the association selected and had Nana Atakora Amaniampong sworn in as the New Asantefuohene after a hotly contested election by the break way faction whilst Nana Tieku held on to power.

With the ensuing discord, the Asantehene Nana Osei Tutu delegated Nana Adusei Atwenewa Ampem, Omanhene of Tepa Traditional Area to come to New York to make peace among the disputing factions and put the issue to rest.

Presiding over the meeting with the various factions Nana Adusei Atwenewa Ampem ruled that Nana Tieku Acheampong should bring his reign to an end within six months which falls on December 1, 2019, and hand over power to Nana Attakora Amaniapong to become the new Chief of Asanateman Association in New York.

Nana Adusei Ampem's pronouncement that the outgoing chief Nana Tieku Acheampong's should hand over in the six months.

Nana Tieku Acheampong in his response obliged to act accordingly.

Nana Adusei Ampem urged the feuding factions of the Association in New York and USA to remain united by resolving their differences amicably. " It's time for you all to bury your differences and reorganize the Asanteman Association with a unity front "

" Nana Adusei Ampem tasked them to support each other and work together with the spirit of peace and unity.

This brings to a close the issue of factionalism within the Association and it is believed that peace would prevail going forward. The Asanteman Association is a group of Ghanaians of Ashanti origin who have immigrated to the New York area of the United States. The association promotes the Ashanti culture, among other things, in the USA.