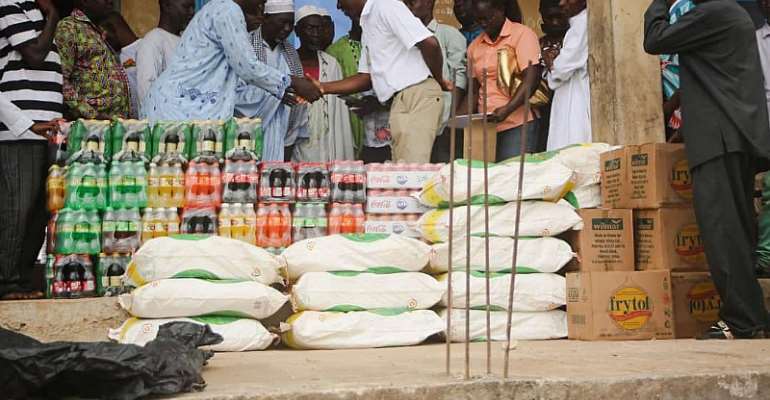 Staff of GSBPL exchanging pleasantries with some members of the Muslim community.

Golden Star Resources, Bogoso/Prestea (GSBPL), has lauded the level of co-existence between Muslims and the non-Muslims in the communities in which they operate.

This statement was made by the Finance and Administration Manager of the company Mr. Rodney Oddoye, during a donation of some food items to Muslims on Tuesday 4th June, 2019 at Bogoso towards the celebration of this year’s Eid-ul-Fitr.

The items include bags of rice, cartons of milk, canned products and assorted soft drinks.

Mr. Oddoye handing over the items on behalf of GSBPL to the Muslims said, Muslims are people in the community the company interacts with many times, so it will be unwise to watch their festival slip without supporting them.

“They are members of this community we interact with all the time. Some of them are our employees and some of them provide services for us. So when they have festivals or important days we would like to celebrate it with them” Mr. Oddoye stated.

He also assured the Muslim community that, Golden Star is committed to supporting them anytime they call upon them.

Receiving the food items on behalf of the Muslim community in Bogoso, Muniru Zibrim thanked the company for their numerous kind gestures.

He stated that, the company has always been part of the celebration by donating food items and that there has been an increase in this year’s donation.

Mr. Zibrim said, “this is not the first time Golden Star has done this. We very much appreciate it and will continue to pray for them for more production.

"I Took My COVID-19 To Some Registration Centres But I Was V...
22 minutes ago