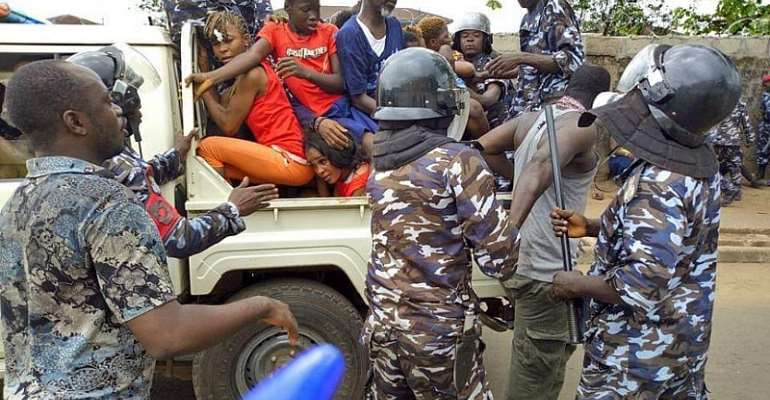 A court in Sierra Leone has sparked a deep political crisis after annulling the election of leading opposition lawmakers.

A Sierra Leone High Court ruling has cancelled the election of 10 opposition MPs for alleged breaches of the electoral law during the March 2018 legislative polls.

The verdict meant that nine MPs elected under the ticket of the main opposition All Peoples Congress were to be kicked out immediately and replaced by candidates of the ruling Sierra Leone People's Party who came second in the elections.

Selective justice?
The decision helped the ruling SLPP regain a one-seat majority in the chamber (58 against 57 for the APC the opposition) prompting the disqualified MPs to barricade themselves in their offices as their supporters clashed with police in the capital Freetown.

“Police came to disperse these people, it became violent and they had to fire tear gas canisters into the parliamentary building,” recalls Amadu Lamrana Bah, Deputy News Editor at the Freetown-based African Young Voices media group.

Bah told RFI that more than one hundred people including former ministers and a sitting MP detained in connection with the violence had been released on bail and 38 of them charged.

As civil rights activists pressed calls for an independent inquiry into the political violence, the AYV editor says a fake blood controversy has gone viral on social media, after a malicious mind tried to discredit complaints filed by people injured by the police.

Manipulated judiciary?
The High Court's verdict, delivered more than a year after the 2018 elections, has got stakeholders crying foul. Some observers see the ruling as outside the court's mandate, as the latest evidence of continued manipulation of the judiciary by President Bio's government.

The influential Cocorioco newspaper also criticises a scheme by President Bio's government to “deliberately and systematically eliminate people from some of Sierra Leone's tribes, from key positions in the civil service and government institutions”.

“Jobnocide”
The publication cites the recent sacking of members of the Human Rights Commission and their replacement with people from Bio's Mende tribe as an example iof the so-called “jobnocide” taking place.

Meanwhile the Patriotic Vanguard reports that President Bio is in London to attend a conference with Sierra Leone investors.

But according to the Telegraph the trip comes at a time honest investors on the ground are packing their bags and leaving because of corruption and the weak rule of law.

'China's 24th Province'
Analysts point to “opaque” conditions under which Sierra Leone's largest iron ore mining company African Minerals Limited was sold to China's Shandong Iron and Steel as the latest evidence of “how the interests of people in power in Freetown tie perfectly with those of Beijing's industrial cartel”.

China's economic interests in Sierra Leone have risen by over 400% in the last five years, prompting Sierra Leoneans to now refer to their country as the 24th province of China, according to the Telegraph.

“How much does the public know about what we are committing our country to?” wonders Femi Claudius-Cole, leader of Sierra Leone's new Unity Party in an exclusive interview with RFI from Freetown.

"I hope we are not mortgaging ourselves from one colonial master to another," warns Claudius-Cole, who is the first Sierra Leone woman to create a political and stand in her country's presidential elections.

Despite owning huge mineral and diamond deposits, Sierra Leone remains one of the world's poorest nations.