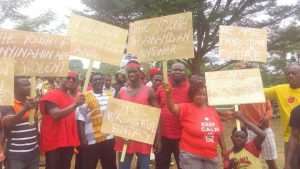 Residents of Nyinahin and surrounding communities in the Ashanti Region have expressed dissatisfaction with the government's plans to mine bauxite in the area in a manner they consider dangerous to their lives.

The elders and the youth say the government has not engaged leaders of the communities in any dialogue to settle on how the mining activity under the $2 billion Synohydro deal will benefit community members.

Research shows that bauxite mining at Nyinahin could last for over 150 to 300 years; and is estimated at $45 billion.

This is significantly longer than at Atewa where, according to research, bauxite can only be mined for 30 years.

But the estimated impact of the bauxite in Nyinahin, along with Awaso, and Tabi Offin, will not be as significantly damaging as mining in a watershed Atewa that provides water for five million Ghanaians.

In an interview with Citi News, a Member of the Nyinahin Elders Association and the Odikro of Yawberema, Nana Boakye Ansah said a discussion of that sort will help secure a better future for the generations in and around Nyinahin.

“[We] want to seat on a table with the government, produce papers for an agreement and send to Parliament so it can be a source of confidence between the people of Nyinahin and surrounding areas and the government of Ghana so that in the near future, even if we are dead, our children can have some benefit from the bauxite.”

In June 2017, the government announced that Ghana will establish an integrated aluminium industry by mining and refining its bauxite deposits, particularly in the Nyinahini enclave.

The Ghana Integrated Aluminum Development Corporation, a Public holding company has been established and entrusted with the management and development of bauxite.

Request for proposals to select a mining company and an off-taker for the refined bauxite are yet to be announced.

It is estimated that Ghana's bauxite deposits in refined form could earn the country an export value of over $350 billion.

Voters’ Registration: Everyone Will Be Safe – A/R Minister A...
44 minutes ago