Show Patriotism By Voting NPP Out In 2020 — Edem Agbana 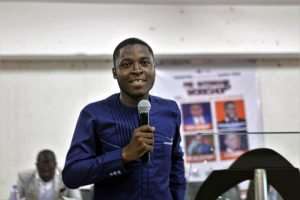 A Deputy National Organizer of the National Democratic Congress (NDC), Eric Edem Agbana has said showing the Akufo-Addo government the exit in 2020 will be an act of patriotism and service to the country.

According to him, that is the only democratic means of restoring dignity to the country.

“Working tirelessly to regain power from the inept, repressive and sad-sack Akufo-Addo government, will be a patriotic act. It is a rescue mission, infact, it is a democratic means of restoring the dignity of our country,” he said.

Speaking at a public event to mark the 40th anniversary of the June 4 uprising at Nungua in Accra, Mr. Agbana expressed regret that the challenges in the country that led to the June 4 revolution in 1979 have worsened in Ghana’s current dispensation.

He said the development calls for collective action to change the narrative since it leaves scars on the conscience of the country and all must take responsibility for the failure to root out corruption and other ills in society.

“Our country is still miserably chained by corruption (perhaps, even more pervasive now), nepotism, ineptitude and repressive governance. Political and economic injustice is still widespread and a chunk of our people, still live in abject poverty. Mr Chairman, these are scars on our conscience and we must take collective responsibility for our inability to sustain the ideals of the revolution,” he said.

While accusing the government of being insensitive to the challenges confronting Ghanaians, he said an NDC government will restore confidence in political leadership in the country.

“The challenges that confronted our country which you [Rawlings] helped redeemed over forty years ago have not only worsened but have taken new dimensions. We now have foreigners who with support from our political leaders uncontrollably move into our forest reserves and wantonly destroy it in search of gold and rosewood, among others.”

“I am confident that the next National Democratic Congress will from 2021, restore confidence in political leadership. It is a matter of moral and political obligation; it is the only way our democracy can be sustained,” he said.

Former President Jerry John Rawlings who addressed the event called for an urgent review of the nation's constitution to remove clauses that protect high-level political actors from prosecution and accountability.

Mr. Rawlings said there are too many indemnity clauses in the Constitution that do not serve the national interest.

“Over the years the indemnity clauses have emboldened certain characters to abuse their offices and profit themselves. The constitution of the Fourth Republic was created by us, for us and to serve us, and in light of the 25 years, there is an unqualified need to reform or rewrite our current constitution. An urgent constituent assembly ought to be established with the necessary powers to rewrite the constitution,” he said.