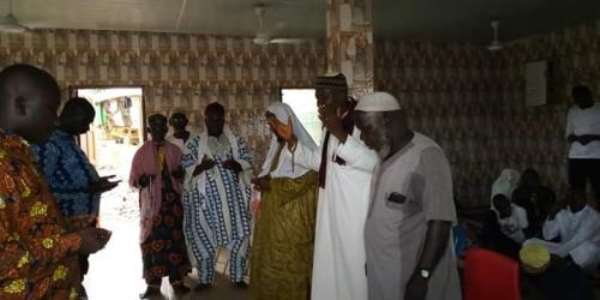 The Municipal Chief Executive (MCE) of Jomoro Municipality in the Western Region, Hon. Ernest Kofie has urged Muslims to continue to use this occasion to pray for the peace of this country.

He says without peace, there will be no development in the country.

The MCE made the call at Tikobo No.1 Mosque where he presented 40 bags of rice, 20 gallons of frytol oil, 5 bags of rice among others to all the 25 Muslim Communities within the Municipality to climax their Ramadan.

He noted that the donation will go a long way to deepen the relationships towards the development of the area.

"We are not giving the items because of votes buying but your prayers, in fact your prayers have strengthened us as government", he emphasized.

The MCE thanks Allah for leading the Muslims for a successful end of their fasting and prayer.

The MCE urge them to pray for President Akufo-Addo, the MP of the area and NPP government for God's guidance to develop Ghana.

He added that "I know your prayers and fasting will help this country sustain peace and development and I also know that Allah has listened to your prayers".

He appealed passionately to the Muslim Communities to eschew violence in their respective areas, and support the course against terror threats.

The Deputy Chief Iman of Jomoro Municipality, Alhaji Siedu Jallo who received the items on behalf of the Muslims thanked the MCE and MP for the area for the kind gesture.

Alhaji Siedu said they will continue to pray for the nation for peace and rapid socio-economic development.

He asked his colleague Muslims to be law-abiding and seek the face of Allah in all their endeavours.

Alhaji Siedu, further thank the Akufo-Addo led Government for a successful Pilgrimage organised last year for Muslims across the country adding that, it was was one of the best ever journey the Muslims has ever embarked.

"In fact I use this opportunity to thank President Akufo-Addo and his government for the support before, during and after the Hajj and i must say that the 2018 Hajj is so far the best because government of Ghana fed us well and also provided us with good health care and as a result only two Pilgrims but other countries like Nigeria, Burkina Faso and others, 15 people each of their Pilgrims lost their lives", he emphasized.

He also encouraged government not to relent on striving to work for the development of the nation regardless of the abusive languages and attacks meted out to public officials on the airwaves adding that since the government respects the Islamic Community they would also support them in prayers to the Ghanaian people.

He revealed that the MCE and MP are doing well for supporting their children education.

"We pray for the good health of the MP, the NPP Jomoro Constituency Executives, the good people of Jomoro and Ghana. We also pray for Hon. Ernest Kofie, the NPP government especially President Akufo-Addo and Dr. Mahamadu Bawumia", the Deputy Chief Imam prayed.

The MCE was accompanied by the staff of the Jomoro Municipal Assembly, some Assembly Members, the NPP Jomoro Constituency Executives led by their Chairman, Mr. Simon Amoah as well as the media.