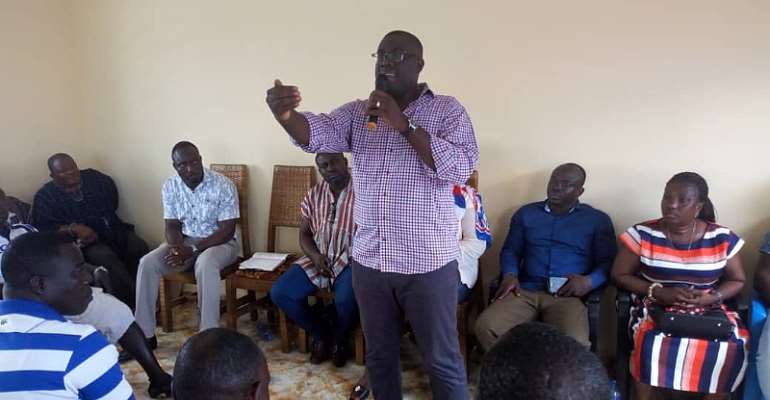 The ruling New Patriotic Party's National Organiser, Sammy Awuku popularly known as 'The Supremo' has visited the fisherfolks at Axim in the Nzema East Municipality of the Western Region.

The one-day visit was to listen to their concerns, challenges and look at the way forward of the CLOSE SEASON of the fishing industry.

According to the fishermen, though the season is not yet over but they are entreating those in authorities that, in the next season, governament should intensify its education in order for them to get in-depth understanding and the significance of the close season, so as to harmonize government programmes along the fishing communities.

According to one of the Chiefs who spoke at the gathering, the close season should have started 17 years ago, but thanked government for the bold decision to implement the close season policy; for they believe it's going to yield the needed results for the fishing industry.

On his part, the Chief Fisherman of Lower Axim, Nana Kofi Bentsil, commended President Akufo-Addo led Government for the construction of the Sea Defense Wall at Axim.

He entreats his colleague fishermen to desist from light fishing, the use of dynamite and improper net fishing.

He urges Sammy Awuku to inform Government that, they are ready to relinquish their old nets for a replacement by their nets with modern nets to aid them in their fishing industry.

One of the Fishermen disclosed that, the major tools in the fishing industry is premix fuel, the nets and the outboard motor.

He further stated that the government should keep up the good work it is doing and continue to help them sustained the fishing industry.

Addressing the gathering on Tuesday, May 4, 2019 at Axim, the NPP's National Organiser, Sammy Gyamfi commended the fisherfolks for cooperating with Government to ensure that the sector becomes lucrative.

He disclosed that the Akufo-Addo Government has secured funds to construct a Fishing Harbour for the good people of Axim.

He added that the money accrued from the selling of premix, the committee should see to how best to use the money to benefit the good people in the area.

He promised that government would find an alternative livelihood programme for the good people of Evalue Ajomoro Gwira in the next close season of fishing.

After the gathering, Sammy Awuku, seized the opportunity to interact with market women and some sellers in the area.

He, therefore, called on the fisherfolks to continue rally behind the Akufo-Addo led Government to develop the area.

He disclosed that the issue of premix shortage has been the thing of the past adding that the government has supplied the fisherfolks premix on time.

The MCE also added that as a result of a transparent Premix Committee set up by the government, the Committee has raised money to construct ultra-modern ten seater water closet toilet facility.