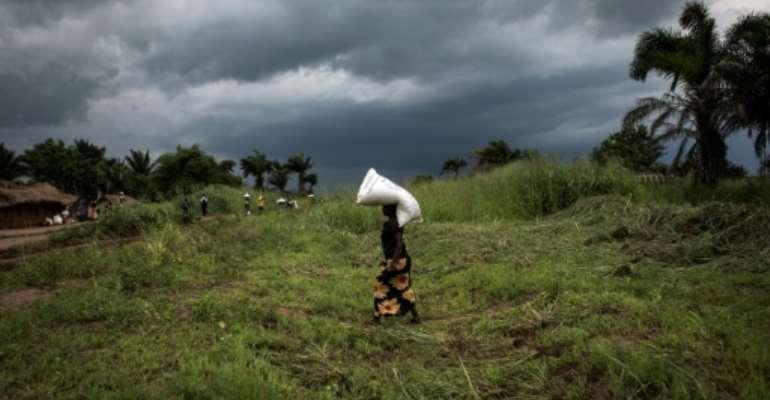 A Congolese woman carries a sack of food onto her heads at a food distribution on October 25, 2017 in Kasala, in the restive region of Kasai, central Democratic Republic of Congo. By JOHN WESSELS (AFP/File)

In a fresh report, the experts warned that Kinshasa is moving too slowly to investigate and prosecute a wide range of suspected war crimes and crimes against humanity committed in Kasai in 2016-17.

"The military justice authorities must... step up the pace," said the report, which will be presented during the next session of the UN Human Rights Council (June 24- July 12).

It pointed out that in the past three years, only a single case has proceeded so far that "it is ready to be tried".

"The passage of time works against the criminal justice system by weakening the reliability of testimony, which is often the only evidence available, and making it more difficult to identify and preserve physical evidence, such as mass graves," the report warned.

Kasai was plunged into violence in September 2016, a month after government troops killed a local chieftain, Kamwina Nsapu.

The chieftain was opposed to the Kinshasa government and rebels fighting in his name battled government forces and a pro-government militia called the Bana Mura, with at least 3,400 killed in the region in just over a year of violence.

Last year, another group of UN investigators accused both the security forces and the militia fighters of committing "crimes against humanity (and) war crimes" in the region.

In their report, those investigators said both DRC's security forces and militia members were targeting civilians in Kasai, highlighting atrocities including murder, mutilation, rape, sexual "enslavement" and other "inhuman acts".

The UN rights council last June tasked a new group of investigators with assessing Kinshasa's progress in fighting impunity in the region.

In their findings published Tuesday, those investigators congratulated Kinshasa for putting in place "an investigation and prosecution strategy", but insisted that "this strategy can be refined, strengthened and implemented more quickly."

They cautioned that efforts so far had focused disproportionately on crimes committed by the Kamwina Nsapu militia, stressing that "defence and security forces... have also committed abuses on a large scale."

They also lamented that not enough attention is being paid to certain types of crimes, including widespread horrific sexual violence and crimes committed against children.

The investigators urged the authorities to "adopt a much broader strategy of investigation and prosecution, otherwise the efforts to combat impunity in Kasai will be futile."

Ever since DR Congo's President, Felix Tshisekedi came to power in January, violence in his native Kasai has diminished, and a number of Kamwina Nsapu militia have laid down their weapons.

But the UN experts warned that "there is nothing to suggest that others intend to follow suit adding that other militia were also forming in the region.