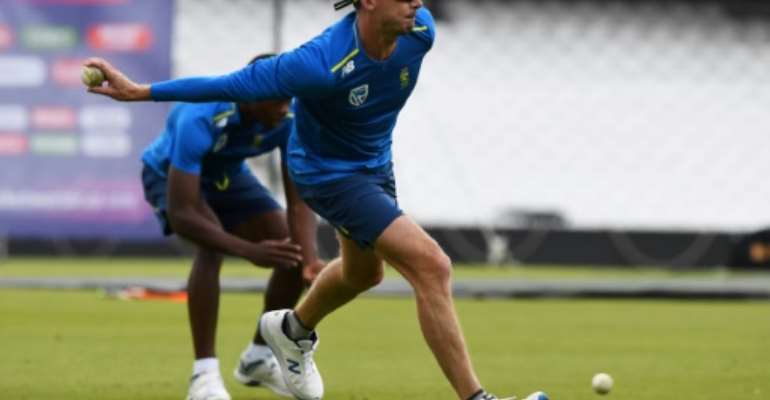 South Africa's Dale Steyn takes part in a training session at the Oval on May 28, 2019. By Dibyangshu SARKAR (AFP)

South Africa captain Faf du Plessis said his struggling side could still reach the World Cup semi-finals, even after talisman paceman Dale Steyn was ruled out of the tournament with a shoulder injury.

The 35-year-old fast bowler had been battling to be fit in time for Wednesday's crucial clash against fancied India in Southampton after two defeats in two matches for South Africa.

But the seamer has been forced to admit defeat, leaving head coach Ottis Gibson's side short of firepower.

"Steyn has suffered a second shoulder injury which has not responded to treatment and has ruled him out of bowling for the foreseeable future," Cricket South Africa said in a statement.

South Africa have called up left-arm pace bowler Beuran Hendricks as a replacement for the remainder of the tournament, with Lungi Ngidi also nursing a hamstring problem.

Paceman Anrich Nortje was ruled out with a thumb issue before the World Cup even started.

But Du Plessis said despite their injury problems and their poor start to the tournament, South Africa were aiming to reach the last four of the round-robin event, in which all 10 teams play each other.

"Six games is the target, and there's seven games left," the skipper told reporters during his pre-match press conference at the Ageas Bowl.

"It would be great if we could start that tomorrow. There's no easy games any more in the World Cup.... Whether it's winning or losing, the main thing is getting to the semi-finals."

South Africa, who have never won the World Cup, have endured a wretched start to the tournament, losing to hosts England by 104 runs then slipping to a 21-run loss to Bangladesh on Sunday.

Top-order batsman Hashim Amla returns for the India game after missing the second match following a hit on the head during the tournament opener against England.

Du Plessis said he it was important to stay "strong and positive" despite the challenge of working with limited resources.

"Naturally, guys will have a little bit of confidence that's been chucked away and that is normal, that is part of being human," he said.

Hendricks will arrive on Wednesday but will not be available to face India.

Du Plessis said he hoped Steyn's international career was not at an end.

"It's been a tough two-and-half years for him, and he would need support right now," he said. "The team and management will put things in place to look after him. He needs love at the moment, he tried really hard to get fit for this campaign."

Du Plessis admitted South Africa's injury problems had forced him to draw up a new plan.

"I think we'll really have to look at that now, there's only 14 players to pick from now. There's not a lot of options for the bowling attack," he said.

"You have to decide whether you go with all your all-rounders in your team, bat deep and try to get a big score."