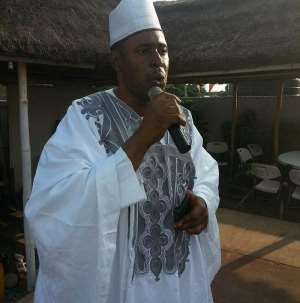 Bala Salifu Maikankan, the man declared Governor of Zongos by the National Chief Imam has called on Ga Traditional Leaders to exercise flexibility in enforcing the ban on drumming and noise making during Salah Celebration.

In a statement attached to a video he shared on his social media platforms, the influential Muslim youth leader, businessman and politician noted with concern warning from Ghana Traditional Council to remind Muslims about noise on Salah which has coincided with ban on drumming and noise making in some parts of Greater Accra Region

He called on the Ga Leadership to use this to serve as a tool for strengthening the relationship between themselves and muslims.

This year's Salah Celebration has coincided with the annual ban on drumming and noise make and it appears leader of Ga Traditional Council are bent in enforcing this directive.

However, most muslims are bent on celebrating it without being controlled.

In view of this, the Ga Traditional Council has officially written to the Islamic Unit to remind them of the need to observe this ritual even on the Salah day.

In view of this, the Salah Holiday means a lot to the Muslim that negotiating how it should be celebrated will not yield much result.

The Gas have also used the strongman's approach in enforcing this tradition and same with dealing with people who fail you to observe it and this is why I am worried about the development on the day if a middle ground is not reached now.

In areas like Darkuman, Fadama, Abeka where there is a strong Muslims presence, the people are honouring the directive to stop making noise but this obedience is never likely to extend to the Salah day.

In a country where freedom of worship is protected by the constitution, at what point does tradition override one's religious freedom or vice versa?

Adding to the fact that Salah is a recognised and a gazetted holiday decades ago, I think it is time to clearly define how Holidays should be observed when it clashes with such traditional decisions.

I believe that once a group is given a holiday, it is within their right to observe such a holiday in any legal means and as they please.

We have a potential security problem starring at us and the earlier a middle ground is reached, the better for everyone.

I am a Muslim and understand my bias here, however, in this instance, the Ga Traditional Council in my estimation has to show leadership and compromise, I believe just and day in the name of peace is rather going to strengthen the relationship between the two groups.

This should also be done in recognition of the respect Muslims in the region have accorded the ban on drumming and noise making.

Using the strong man’s approach this to enforce the directive can spell doom and so it is important a middleground is reached now.

In this instance, I believe much more depends on Ga Traditional Council than Muslim and hence this appeal to avert any misunderstanding.

After the one day holiday, we will continue with the silence and help see to its logical conclusion because we respect tradition and peaceful co-existence