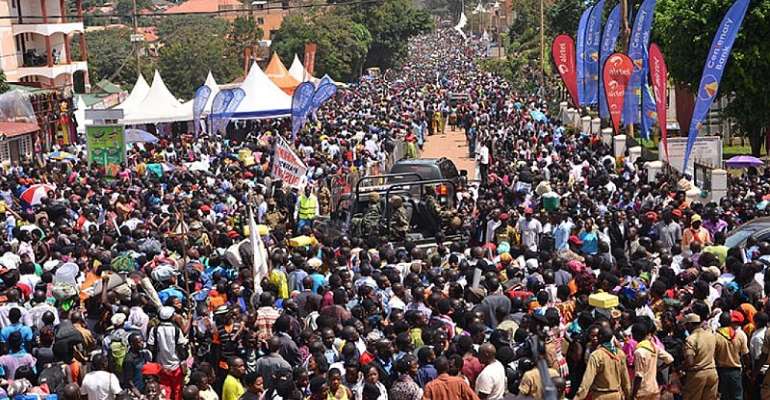 Thousands of Catholic pilgrims from around the world have gathered in Uganda to celebrate Martyrs Day, where more than 20 Catholics converts were executed 124 years ago on the instructions of King Mwanga of Buganda.

At least 20 Anglican converts were also executed by the king, who allegedly took offence to the conversion of his subjects.

The Remembrance Day for the deaths of the Catholics took a global dimension after the Vatican beatified the martyrs in 1920, and later canonised them in 1964.

Large-scale security operation
Organisers say the hundreds of thousands of pilgrims who attended Monday's concelebrated mass included more than 5,000 foreigners. They reportedly made the journey to Namugongo Township, outside Kampala, by plane, bus and foot. Some trekked for weeks to reach the holy shrine by 3 June, according to several websites.

The Observer reports that as early as 6:00 AM thousands more were seen queuing from as far as Kyaliwajjala Township, while hundreds were seen trekking from different routes leading to the shrine hours after religious ceremonies went underway.

The publication quoted Red Cross officials in Namugongo as saying that at least 22 pilgrims had been rushed to Kiruddu, Kawempe and Mulago hospital in critical condition, after suffocating and sustaining injuries while at the Martyrs shrine.

But the sweltering heat and hard conditions didn't dent the passion of the pilgrims.

"In God we trust"
Despite the massive security operation mounted around Martyrs Day, Namugongo bloggers reported instances of people paying up to Shs1,000 to get as close as possible to the ceremonial grounds.

Others reported the lucrative business generated by Martyrs Day in Namugongo that has left residents counting their blessings. “It is God who changes the day,” said delighted fruit seller Peterson Walungembe to The Observer's correspondent as he went around the shrine premises selling a slice of watermelon for Shs1,000 a piece.

“Organisers have rolled out a massive plan to provide drinking water and sanitation facilities for the pilgrims and to ensure that the shrine premises are clean and hygienic, so they don't have any epidemic outbreak,” Francis Kangolo, editor of the Kampala-based New Vision newspaper, told RFI.

His publication ran a special supplement on the pilgrimage taking place in the Namugongo shrines.

Kangolo says that New Vision publications, alongside The Observer and The Red Pepper, Uganda's Communications Commission and the police are partners in a charity walk along the road where some of the martyrs were killed to raise 200,000 dollars needed to treat 200 Ugandan children diagnosed with heart disease.

There is also a great degree of politics taking place at the shrine with several cabinet ministers and lawmakers keen to be seen facilitating the pilgrimage of their constituents.

Forgotten Muslim martyrs
Beyond the moment of communion offered to the Christians every year, this year's Martyrs Day falls within days of the Eid al-Fitr when Muslims celebrate the end of the holy month of the Ramadan.

The Daily Monitor, which makes the point, recalls that in 1877, almost a decade before the 45 Christians were put to death by Kabaka Mwanga II, some 70 Muslims were killed on the orders of his predecessor Kabaka Muteesa I.

The publication welcomes President Museveni's announcement to build a memorial for the forgotten Muslim Martyrs near the site of the Catholic and Anglican shrines in Namugongo. This, as he offered a State dinner Iftar dinner for Muslim leaders last Tuesday.

As Daily Monitor puts it: “Apart from preaching the message of love and prosperity, it would be a beautiful thing if the sheikhs and priests stood at the pulpit and denounce hate greed and bigotry in all forms.”

Power comes from God
As the 55th celebration of Martyrs Day got underway, Ugandan lawyer and human rights activist Bireete Sarah took to Twitter to pray that God “greatly reward those that have taken a long walk of faith to the venue”.

Some politicians also implored the Ugandan saints to intercede on their behalf and ask God to end the political stalemate in the country governed by Yuweri Museveni without interruption for 33 years.

"Uganda Martyrs are a great inspiration to those who seek the Lord!" said opposition leader Kizza Besigye on his twitter. "'But let justice roll on like a river, righteousness like a never failing stream,' Amos 5:24. HAPPY MARTYRS DAY!"