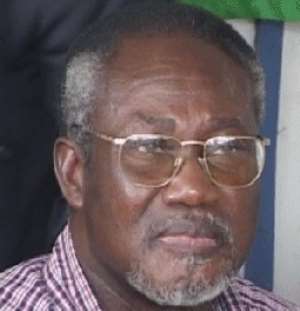 The Statesman can reveal that there are frantic but calculated steps to launch a new political party by next month. However, sources close to the process say that the date could be symbolically pushed to March 6, Ghana's Independence Day. The new party is expected to be predominantly led by pro-Nkrumaist members and former members of the National Democratic Congress. Notwithstanding, the man tipped to chair the new party until it holds its first post-launch conference tentatively in March 2007, is Obed Yao Asamoah, the former NDC Chairman, who traces his roots to the UP (Danquah-Busia) tradition.

The lobbying to attract more and more disgruntled members and disillusioned 'sympathisers' of the NDC has gone as far as to the political doorstep of Rawlings' former right hand man, P V Obeng. But, The Statesman has learnt that he has so far resisted all attempts to add his name to the growing list.

Several leading members and sympathisers of the Convention Peoples Party who had earlier toyed with the idea of forming a new centre-left party outside of the Delle-led CPP, are said to have re-assessed their sense of pessimism against their mother party.

They are said to now be looking at how to use the internal electoral system to throw out the current executive en masse and vote in a whole new team that, in their view, would appear attractive to the overwhelming number of doubters of CPP's electoral viability out there.

Dr Paa Kwesi Nduom in the Monday, January 9, 2006 edition of the Graphic was reported to have said that if by the end of June 2006, the CPP had not gone to congress to elect a mew leadership then nobody should be blamed for either forming a new political party or joining another party of one's choice. But, the personalities behind moves to form the new party are not waiting for the Nduom ultimatum to expire. They are going ahead with or without the oscillating CPP gang.

Edmund Delle's chairmanship of the CPP has come under severe attack from within, notably, from Mike Eghan, Freddie Blay and Paa Kwesi Nduom. The last two form the majority of CPP MPs. Mr Eghan resigned this year as Vice Chairman of the party, calling on the others to step down before their mandate expires in 2007.

Some analysts have described the job of CPP publicist Kwesi Pratt Jnr as acting as fitness instructor for a 57-year-old mummy.

Historically, the electoral facts show that since the first elections of the Fourth Republic in 1992, the Nkrumaist parties have seen their electoral deposits gradually dwindle in the presidential race from a high of 11.4 percent in 1992 to their worst ever showing of 2.92 percent in 2004.

In an article to be published in next Monday's edition of The Statesman, political analyst Victor Newman argues that our electoral system a mixture of America's 50+1% and Britain's first-past-the-post will continue to ensure that two parties remain dominant.

He continues, “It is instructive to note that, between the times of lifting of the ban on political party activities in 1992 and today, the Nkrumaist groups have formed Heritage I & II, PHP, PNC, NIP, NCP, DDPP, PCP, CP, GCPP and CPP. Currently, with the exception of GCPP and remnants of the original PNC, all the other groupings, through mergers and “acquisitions”, are part of CPP. Reform (NRP), which broke away from the NDC just before the 2000 election, also tried a merger with the CPP and PNC to form a New CPP. That effort failed when the two Nkrumaist parties could not agree on a common symbol. NRP therefore decided to go it alone in 2004. The Eagle party, which had been in alliance with the NDC since 1992, went into what was termed the Grand Coalition with PNC and GCPP before the 2004 election.”

While there is still disquiet in the Nkrumaist camps, with the much-touted merger of the PNC and CPP still in abeyance, the make-up of the political party set for a February/March launch is expected to be predominantly NDC. NDC members with CPP-roots such as Faustina Nelson, Kwesi Botchwey and Frances Essiam are likely members.

Some NDC MPs may also be persuaded to join the fresh fold.

John Mahama, who is expected to lose out on the presidential candidate slot for the NDC, could be persuaded to join the new party next year. The NDC goes back to congress to elect a flagbearer later on this year.

The formation of the new political party, political analysts assert, would significantly hurt the electoral fortunes of the NDC come 2008.

“It is an undeniable fact that the uneasy calm that permeated both the leadership and rank and file of the NDC, before, during and after their congress at Legon in March 2003, never went away until their recent congress at Koforidua on December 22, 2005,” Mr Newman will point out Monday. Analysis by The Statesman puts the size of the floating vote anywhere between 15 percent and 20 percent.

Ben Ephson, Editor of Daily Dispatch argues that Rawlings controls about 15 percent of the general electorate, with a smaller percentage sympathetic to the NDC yet opposed to the violent image associated with the Rawlings factor. “If you talk about Rawlings' core support I don't think it would exceed 15 percent. The other 10 percent are those who prefer the non-violence side of the NDC.”

A sizeable chunk of this 10 percent the election analyst believes may be lost to the NDC if the so-called third force plays its cards right.

He believes the exodus from the party is only beginning. “There are a lot of people, like NDC MPs, who would also jump at the right time.”

Besides, Mr Ephson believes the CPP “is dead, only waiting to be buried.”

"I Took My COVID-19 To Some Registration Centres But I Was V...
2 hours ago