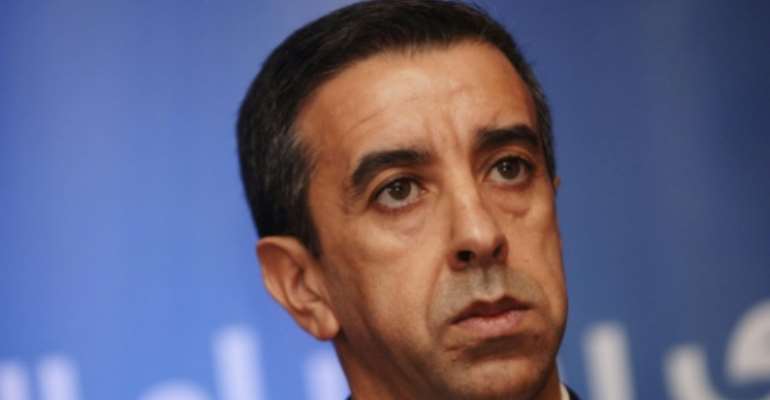 Ali Haddad pictured in October 2015; the prosecutor's office in Algiers has requested the tycoon serve an 18 month jail term. By RYAD KRAMDI (AFP)

An Algerian prosecutor requested Monday that a business tycoon linked to ousted leader Abdelaziz Bouteflika be sentenced to 18 months in prison for "forgery", according to an AFP correspondent.

Ali Haddad, who owns Algeria's largest private construction company, has been detained since his arrest on March 31 while trying to cross into Tunisia, days before Bouteflika stepped down in the face of country-wide protests.

He was carrying two passports -- which is forbidden under Algerian law -- and is also accused of carrying undeclared foreign currency.

"This is a political trial, the charge of fraud has no (legal) basis," Haddad's lawyer Khaled Bourayou told the press.

Speaking in an almost inaudible voice, Haddad denied any falsification and said he obtained his second passport "legally" after seeking an interview with then prime minister Abdelmalek Sellal.

Hassane Boualem, then director of titles and secure documents at the interior ministry, appeared alongside Haddad in court on Monday, accused of issuing the second passport in 2016.

The prosecutor asked Haddad be given 18 months in prison and a fine of 100,000 dinars (750 euros, $840), adding that Algerian law prohibits the possession of "more than one title or travel document of the same nature".

He requested the same sentence for Boualem for issuing the passport "without an administrative record".

Haddad is also being investigated over alleged corruption, his lawyer added.

Described by Forbes as one of Algeria's wealthiest entrepreneurs, Haddad is widely perceived to have used his links to Bouteflika to build his business empire.

Verdicts are expected on June 17, the court announced.