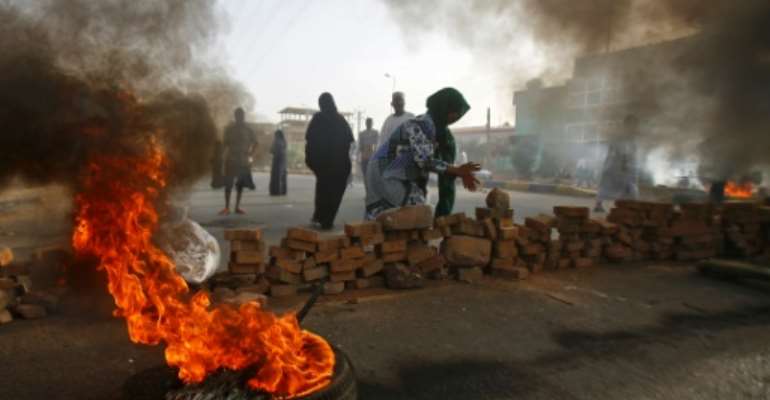 Sudanese protesters close Street 60 with burning tyres and pavers as military forces tried to disperse a sit-in outside Khartoum's army headquarters on June 3, 2019.At least two people were killed Monday as Sudan's military council tried to break up a sit-in outside Khartoum's army headquarters, a doctors' committee said as gunfire was heard from the protest site. By ASHRAF SHAZLY (AFP)

The sit-in protest outside army headquarters in the Sudanese capital, dispersed on Monday, began in April and stayed put even after president Omar al-Bashir's ouster.

The thousands of demonstrators at the camp were demanding civilian rule in the tightly controlled and impoverished country, in a popular uprising that first began in December.

Here is a timeline:

Protests erupted in various cities on December 19, 2018 against a government decision to triple bread prices.

They spread and morph into calls for Bashir to quit after three decades of iron-fisted rule.

Clashes break out as police try to disperse the crowds. Eight demonstrators are killed in two cities, the first of dozens of deaths in protest-related violence over the following months.

On February 22, Bashir declares a nationwide state of emergency. He swears in a new prime minister two days later, as riot police confront hundreds of protesters calling for him to resign.

On April 6, thousands gather for the first time outside military headquarters in Khartoum, chanting "one army, one people" in a plea for the military's support.

They defy attempts by police to dislodge them with tear gas and gunshots fired into the air.

On April 11, authorities announce Bashir has been removed from power and that a transitional military council will govern for two years.

Elation turns to anger as protesters denounce a "military coup" that leaves the regime in place, thousands remaining camped outside army headquarters.

On April 14, protest leaders demand that the new military rulers transfer power to a civilian government.

Sudan's military rulers hold a first round of talks with protest leaders on April 20.

In an April 27 breakthrough, the two sides agree to establish a joint civilian-military ruling council. However differences remain over the composition of the council, with each side demanding a majority.

Tensions flare and on April 30, the military says six security force members are killed in protests. Demonstrators reinforce their sit-in outside the army HQ.

Demonstrators mass in the capital on May 2 as protest leaders say the army is not serious about handing over power.

On May 15, amid expectations that agreement will be reached on a three-year transition to a civilian administration, military leaders suspend talks, insisting demonstrators remove barricades they have set up in the capital.

The talks resume on May 19 but break down the following day, deadlocked over who should head the new governing body with the Alliance for Freedom and Change, the umbrella group of the protest movement, demanding the post goes to a civilian.

On May 28, thousands of workers in government offices, banks, private sector firms and the docks begin a two-day strike to pressure the military rulers.

Two days later, hundreds of women march to the military headquarters calling for civilian government, followed by a protest by thousands more people the next day.

On June 3 protest leaders say the military rulers have forcefully broken up the sit-in outside army headquarters in Khartoum.

The Central Committee of Sudanese Doctors, which is close to the protesters, says in a provisional toll that at least 13 were killed and 116 injured.

The military rulers deny trying to break up the sit-in "by force", saying their forces were targeting a "dangerous" area near the protest.

Protest leaders say they have cut all contact with the military rulers and call for "total civil disobedience".