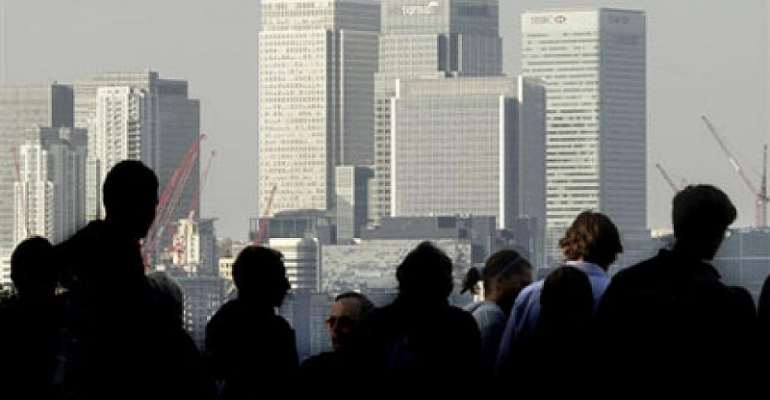 Over the weekend, the European Banking Authority quietly moved from its Canary Wharf offices in London, to set up shop here in Paris, in the business district known as La Défence. The reason for the move is, in case you have not already guessed, big, bad, Brexit.

The business magazine Forbes has a lovely, if completely incomprehensible, report on the move of the abbreviated EBA and its sister agency the EMA from the UK. This is because, once Theresa May, she's the PM, announced that the UK would leave the EU and refuse the jurisdiction of the CJEU, there was nothing the DEXEU could do.

I hope that's clear.
The DEXEU is the United Kingdom's Department for Exiting the European Union. They tried to convince the European Banking Authority, the EBA, that staying in London after Brexit would pose no problem. The EU negotiators saw it differently. The bank is a Single Market, SM, institution operating under EU law. No way could it remain in a country that was leaving the Single Market and repudiating the jurisdiction of the European Court of Justice, or CJEU.

Just to complete the explanatory round-up of those abbreviations, the EMA is also leaving London. That's the European Medicines Agency which regulates the pills and potions which our doctors prescribe to keep us safe, sane and standing upright.

No way were we going to leave such intimate matters in the hands of those pesky Brits. Take a pill, Bill!

But let's get back to the serious stuff, the money!

All through the Brexit debate, the Rulers of the Universe who operate from the towers and spires of London's financial district were arrogantly adamant that the City would remain the centre of the known world, whatever happened to Europe. They would have free access to the European marketplace, simply because that European marketplace could not survive without them.

The Forbes' article continues by pointing out that there is as yet no agreement on anything, and the UK hasn't left the EU. But the cross-channel stance on Brexit has, we are told, hardened considerably. The European elections saw popular opinion polarised between leaving the EU with no deal and not leaving at all.

Mrs May, the unfortunate prime minister whose attempt to please everyone ended up pleasing no-one, has been hounded out of office. The front runners to succeed her would all rather leave the EU with no deal than agree to the Irish backstop – which is perverse, since a majority of Northern Irelanders themselves seem quite comfortable with that bizarre attempt to ensure that northern loyalists get to keep their cake, eat it, and gobble the share of their nationalist neighbours as well.

But that's because the Democratic Unionist Party believes that eternal damnation would be preferable to even a few months of fraternal sharing of their island province with southern Catholics.

Let's hear it for Plan B
As the danger of a no-deal departure increases, more London-based financial institutions are setting up subsidiaries in European Union member countries. European banking is leaving London, heading for Paris, Luxembourg, Frankfurt or Dublin.

Financial services have tended to be the forgotten facet of the Brexit debate. London is by far the richest part of the UK; many of those who voted to leave blame the vast GDP per capita gap between London and everywhere else on its close connections with the hated EU.

Some analysts argue that the UK's dominant financial services sector drains resources from other sectors and prevents the economy from diversifying. And people haven't forgotten the financial crisis, the bank bailouts and the austerity imposed on them to pay for it all.

There is a widespread view that cutting the bloated City down to size wouldn't be a bad thing. Protecting banks from Brexit is thus a much harder sell than protecting car manufacturers and farmers. Unsurprisingly, politicians have concentrated on softening the impact of Brexit on goods exports, and largely ignored services.

The news is not all bad
The Reuters news agency, which specialises in sharp financial information, says that property prices in the City of London are on the way up. So someone thinks London is an investment opportunity, Brexit or otherwise.

The Forbes guy thinks the next big thing could be a career for London's rich and powerful running a kind of off-shore financial centre, right on Europe's doorstep.

Strange creatures those Brits. Even when they offer to leave, they're still hard to get rid of.