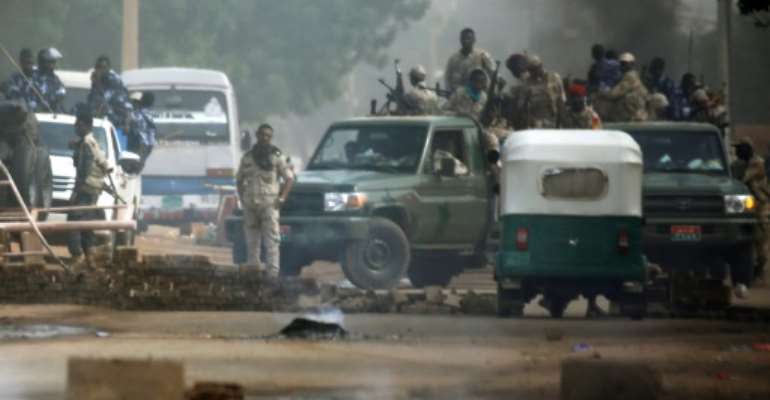 Sudanese forces are deployed around Khartoum's army headquarters on June 3, 2019 as they try to disperse Khartoum's sit-in. By ASHRAF SHAZLY (AFP)

UN Secretary-General Antonio Guterres on Monday condemned the use of excessive force by Sudan's security forces against protesters and called for an independent investigation into deaths from the violence.

Guterres said in a statement that he was "alarmed" by reports that security forces had opened fire inside a hospital in Khartoum.

At least 13 people were killed and dozens wounded when Sudan's forces broke up a sit-in in Khartoum by protesters demanding an end to military rule.

"What is clear to us is that there was use of excessive force by the security forces on civilians. People have died. People have been injured," said UN spokesman Stephane Dujarric.

Guterres urged Sudanese authorities to facilitate an independent investigation of the deaths and ensure that those responsible are held accountable.

UN human rights chief Michelle Bachelet said in a separate statement that she "utterly" deplored the "apparent use of excessive force in the protest camps" and called on security forces to "immediately halt such attacks."

The military council denied its forces violently dispersed the sit-in in front of army headquarters.

The UN chief renewed his call for negotiations to resume on a peaceful transfer of power to a civilian-led authority.

The military council has ruled the country since the ouster of president Omar al-Bashir on April 11, after months of protests against his authoritarian rule.

Sudan's generals, backed by key Arab powers, have resisted calls from African and Western governments to hand over the reins of power.