'Calm before the storm' on Tripoli's front lines 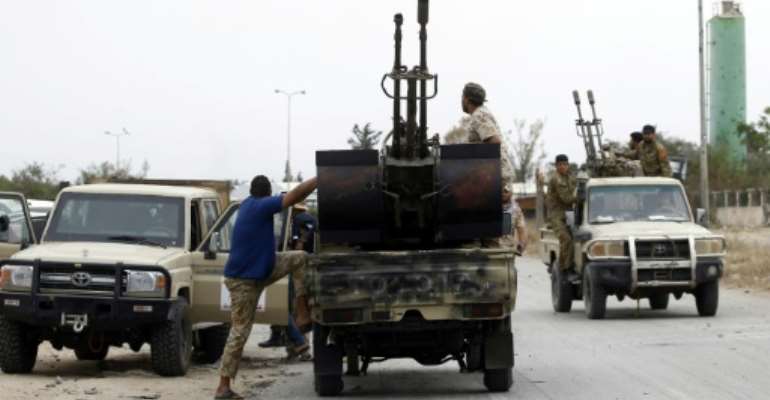 As meat sizzled on a barbeque in a Tripoli suburb, Libyan fighters defending the capital from a military offensive rested during "the calm before the storm" on the front lines.

"We don't deprive ourselves of anything," said a fighter who travelled some 200 kilometres (120 miles) from the city of Misrata to join pro-government forces.

He snapped a photo for his daughter "who wants to know tonight's menu", as the men prepared to tuck into stuffed pigeons and grilled meat.

At a farm in the suburb of Al-Swani, 25 kilometres south of Tripoli, preparations to break the daily Ramadan fast were relaxed despite air strikes a few hundred metres away.

"But it's the calm before the storm," said Hamza al-Hsan, a commander of Misrata's Battalion 166.

The armed group is one of many to join the battle on the side of the Tripoli-based Government of National Accord (GNA), after eastern commander Khalifa Haftar launched his assault on the capital.

Fierce clashes followed the launch of Haftar's offensive on April 4, but the fighting has become sporadic in the densely-populated southern suburbs.

With pro-government forces successfully stopping Haftar from reaching the city centre, the front lines -- which stretch for more than 100 kilometres -- have been virtually frozen for weeks.

"We are still in a position of defence. We were not ready for this war," said Hsan, claiming their adversary had been preparing for years.

He said pro-GNA forces have so far been satisfied with their defensive positions, but will "soon" take an offensive stance. 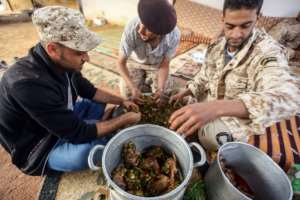 The fighters prepare a feast of stuffed pigeons and grilled meat, to give them strength for what they expect to be a renewed upsurge in combat. By Mahmud TURKIA (AFP)

"We are getting organised and we are just beginning to use heavy weapons. (Victory) is a question of time," he said.

Like many Misrata fighters, he is a veteran of the 2015 battle to drive the Islamic State group from the city of Sirte.

"I had to finish that battle alone," said Hsan, after his father was killed and his brother Mohamad wounded fighting the jihadists.

Mohamad returned to the front lines, this time in Tripoli to face Haftar's forces, only to be wounded again days ago.

"We have lost those who are dear to us. Others are still feeling the consequences of the war against IS," said Hsan, drinking tea among fellow fighters.

And yet "lately Haftar says he's come to fight terrorists", he added.

Haftar's self-styled Libyan National Army (LNA) overran swathes of the country's south earlier this year in a bid to combat what he deemed to be "terrorists", taking over remote oil fields and oasis cities.

Turning his attention to Tripoli, the strongman vowed to "cleanse" the capital of "terrorists and mercenaries". 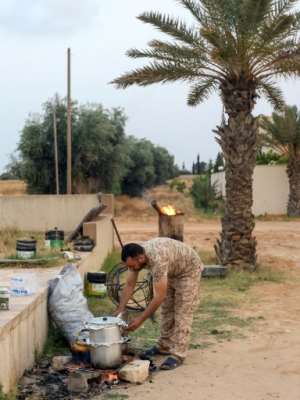 Government loyalists have taken heart from the stalling of Haftar's offensive on the capital, believing that the strongman's supply lines from his eastern stronghold are stretched thin. By Mahmud TURKIA (AFP)

But critics accuse Haftar of wanting to take power by force.

"Despite his propaganda, Haftar can't hold on for a long time," more than 1,000 kilometres from his bases in eastern Benghazi, said Hsan.

"The longer the war lasts, the more it will be to our advantage," he added.

Ibrahim Riadh, a 35-year-old fighter in charge of reconnaissance, said his group has experience on their side.

Armed with just two amateur drones, he said he is able to gather detailed information on enemy positions -- as he did during the fight against IS.

"Haftar thought that Tripoli would be easy. He forgot a very important element: the men he's up against fought for eight months against IS, whose fighters have the most fierce reputation," said Riadh.

The morale of Haftar's forces "is below zero. They have tried numerous times (to enter Tripoli) and have not succeeded."

"It's like when you fail an exam four or five times," he remarked.

While the GNA has allowed dozens of foreign media outlets to cover the fighting, no independent journalists have been given access by Haftar's forces.

Instead, the LNA regularly posts images on social media.

"We have nothing to hide," said one Battalion 166 fighter. "Why doesn't Haftar give access to the press? It's because he certainly has things that he doesn't want to show." 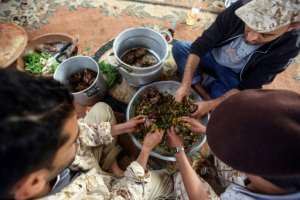 Fighters loyal to the GNA in relaxed mood, despite air strikes a few hundred metres away. By Mahmud TURKIA (AFP)

Sitting on red cushions with food placed on carpets before them, the men turned their attention to the upcoming Eid al-Fitr festival which marks the end of Ramadan.

Struggling to hide his emotion, Riadh said he was not worried about being away from his family "because I'm there to defend them".

"I might not see the results of what we are doing today, but my children will," he said.