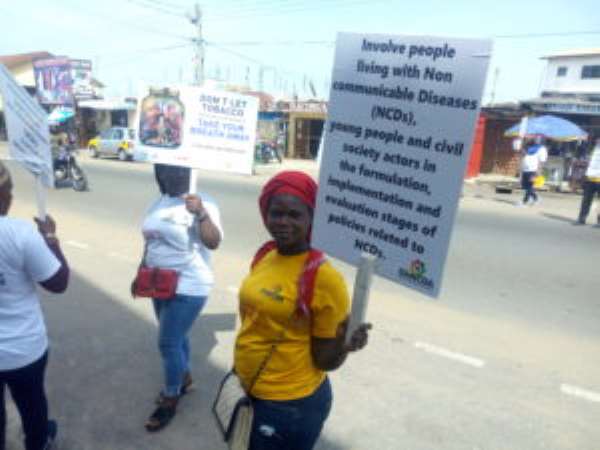 The National Coordinator for the Ghana Non-Communicable Diseases Alliance (GhNCDA), Labram Musah, has called on government to consider increasing taxes on alcohol, tobacco and its related products in the country so as to prevent people, especially the youth from accessing them easily.

According to Mr Labram, who also doubles as the Programmes Director for the Vision for Alternative Development (VALD), increasing tax on tobacco and alcohol will also help the government to raise enough money to develop the nation.

He spoke in an interview with ModernGhana during a sensitization walk through some parts of Accra to create awareness about NCDs and to promote the Ghana Advocacy Agenda of PLWNCDs which was launched recently.

The walk started at the Accra Girls SHS through the Nima-Mamobi highway ending at the St. Kizito School, where the team of health advocates interacted with pupils of the school. The pupils were educated on the dangers of alcohol and tobacco use, as well as the need for them to lead a healthy lifestyle always.

Mr. Labram Musah said research and best practice has shown that “increasing the price of alcohol, tobacco through higher taxes is the single most effective way to encourage tobacco users to quit. It is also an effective way of preventing children from starting a smoke habit,” he explained.

He said currently, alcohol and tobacco related products are attractive for people to patronize because of the low prices and the ease of accessibility.

“Increasing taxes on tobacco to about 70 percent will help generate more revenue for Ghana’s infrastructural development, especially in the era of Ghana Beyond Aid agenda,” he stated.

Chrysolite Akyea, who is a Senior Regulatory Assistant at the Food and Drugs Authority (FDA), admonished the pupils never to attempt to smoke tobacco, alcohol or any hard drugs because the consequences are deadly to their health.

“Going in for alcohol, tobacco and any hard drugs can lead you to go mad, suffer NCDs among many other sicknesses, which would affect your studies negatively. I believe all of you want to be somebody in the future and you can only achieve this when you stay off hard drugs, alcohol, and tobacco, and study hard,” she stated.

Divine Logo of the Non Communicable Diseases unit of the Ghana Health Service (GHS) urged the pupils to adopt healthy lifestyles so they can remain active for a long time.