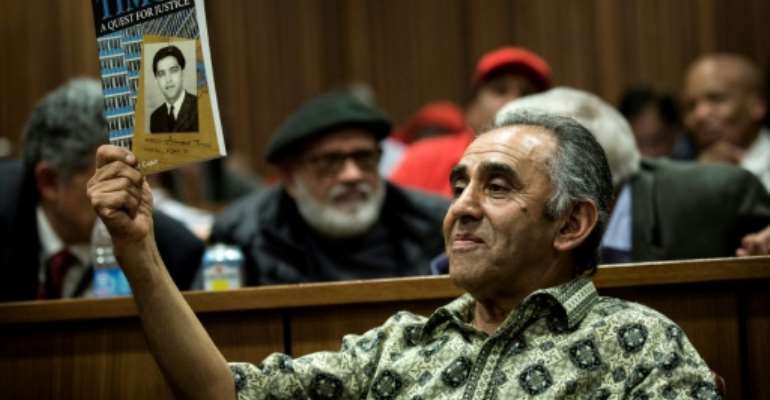 The family of Ahmed Timol, including his brother Mohamed, have fought to bring the anti-apartheid activist's alleged killers to justice. By GULSHAN KHAN (AFP/File)

An apartheid-era policeman accused of killing a South African activist 48 years ago lost his battle Monday to have a murder charge dropped, paving the way for a trial.

Joao Rodrigues, 80, stands accused of murdering anti-apartheid campaigner Ahmed Timol in detention in 1971 when he worked for the police's infamous security branch that targeted the activities of people and parties working to bring about the fall of the apartheid regime.

A campaign by Timol's family to get his alleged killers in the dock so long after the advent of democracy in 1994, is seen as a test case for families of other activist victims whose killers have not yet been brought to justice.

The High Court in Johannesburg said there were no exceptional circumstances to "justify granting the radical and far-reaching" request by Rodrigues to have the case scrapped.

"We had always known that the truth would be on our side," Timol's nephew Imtiaz Cajee told SABC television.

"Today's judgement is not just a victory for Ahmed Timol, but for all the activists who died in police detention.

"Apartheid-era perpetrators can no longer use the excuse of the time delay or like Rodrigues did, talking about his age."

Under South African law, the statute of limitations that determines the maximum period of time that can lapse before a prosecution is initiated, does not apply to the crime of murder.

Monday's ruling came nearly five decades after Timol fell to his death from the 10th floor of Johannesburg's police headquarters.

The 29-year-old died five days after he was arrested in Johannesburg in October 1971.

Police said at the time that he took his own life -- a claim endorsed by an inquest in 1972 but finally overturned by a court last year after a decades-long fight by his family.

The landmark case revived painful memories of apartheid police brutality and led to new calls for justice for dozens of activists who died in police detention under white-minority rule.

Monday's court ruling said the case compelled South Africa to "revisit our troubled past; examine what occurred there (and) recognise the need for reconciliation."

Rodrigues has denied involvement in the killing, but admitted participating in covering up the crime.

No trial date has been set.