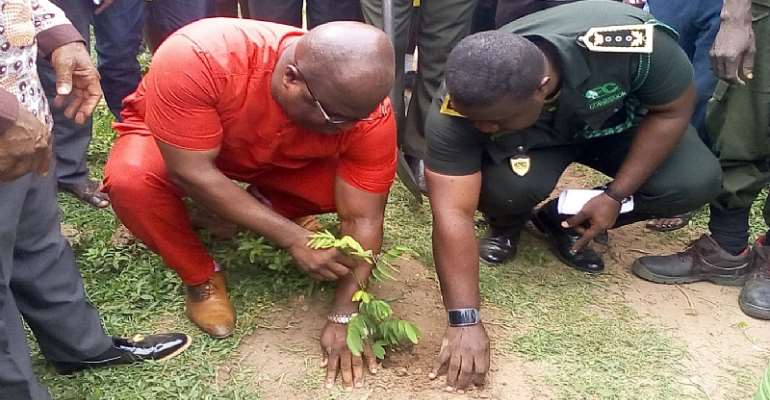 The Ghana Education Service GES in collaboration with the Forest Services Division of the Forestry Commission under the auspices of the Atebubu-Amantin municipal assembly has undertaken a two-day tree planting exercise throughout the municipality.

It involved the deployment of pupils and teachers in first cycle schools to plant about 6000 trees on all school compounds in the municipality to serve as wind breaks to forestall any future destruction to school buildings.

Presenting the seedlings to the director of education, the municipal chief executive Mr. Edward Owusu said the exercise was necessitated by the devastating effects of desertification and climate change.

“Our environment has been taken hostage by natural disasters in recent times. Rainstorms have wreaked havoc on our society. People have lost valuable property, roofs of our educational institutions have not been spared and this has brought misery and suffering to the people,” he stated.

The MCE indicated that these disasters put the assembly under very serious financial pressure adding “as a matter of policy the assembly has decided to devote much of its social services to tree planting.”

He appealed to both pupils and teachers to ensure that the exercise which he described as ‘worth emulating’ is sustained.

Mr. Owusu personally planted the first 3 trees after which he took the press on a tour of some school buildings in the municipality adversely affected by recent rainstorms.