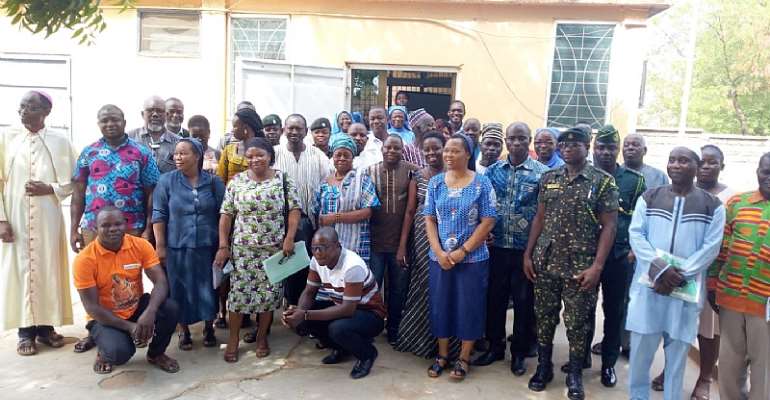 Stakeholders drawn from Bolgatanga in the Upper East Region have attended a- two -day training workshop aimed at brainstorming on how to help tackle the spate of child abuse and vulnerable adults in the region.

The stakeholders brought out the staggering realities of the abuse of children and vulnerable adults including alleged instances where some fathers and some mothers often force their daughters and sons to have sexual relationships with them.

The 43 stakeholders were drawn from the Media, Social Welfare, the Police, Immigration, Fire Service, Department of Children, Traditional Authorities, Non-Governmental Organizations NGOs, the Ghana Education Services, (GES), and the Bureau of National Investigation, (BNI), the Judiciary, Christians and the Muslim fraternity, Civil Society Organization among others.

The interactive programme which was also aimed at brainstorming collectively to map out effective strategies to help safeguard child abuse and the vulnerable adults in the society was funded with the support of the Hilton Foundation through the Daughters of Charity of Saint Vincent De Paul and World Vision Ghana.

Reports in recent times also indicate that the Catholic Church has been in the limelight of human rights abuse especially in the Western World and Africa including Ghana.

The programme, therefore, sought to challenge the Catholic Church and other societies to rise to the occasion regarding the spate of exploitation and the abuse of the vulnerable in society particularly the minors.

Speaking at the programme on Saturday, the Bishop of Navrongo- Bolgatanga Diocese , Right Revered Bishop Alfred Agyenta, stated that in the past the church was not doing enough in reporting some of the human rights abuses within the church and stressed the need to encourage people to speak up and bring to the fore the social vices that are taking place within the church and outside.

This, he stressed would help inform government, Civil Society Organizations and other stakeholders to map out strategies to help address the phenomenon.

Bishop Agyenta explained further that the church’s role of evangelization is not only on the spiritual and moral aspects alone but on human dimension as well.

“Man was created in the image and likeness of God and the church should reflect that as far as human development is a concern. The church cannot live in isolation in these perilous times”, he stressed.

The Regional Manager of the Catholic Education Unit and a member of the Child Protection Team, Reverend Sister Bernardine Pemii, stated that no amount of investment in education would yield the desired result if parents did not secure the safety of their children at home.

“It only behoves on parents to consider aspects of cultures that are inured to the development of the child and discard the obnoxious ones”, she indicated.

Reverend Sister Pemii who indicated that from home to the school and to the church all are the duty of parents and gardens to ensure that their children are protected, lamented that many parents failed to protect their children.

“The fear, sadness, loneliness, helplessness and the desperation should guide everyone to be more circumspect of how these children are handled”, she stressed.

She noted that people also take advantage of the poverty nature of the region to abuse children who have been given to them by parents to serve them.

The Child Protection and Advocacy Manager of World Vision Ghana, Mr Gregory Dery, explained that World Vision Ghana is a Christian organization which had the mission to promote, prevent and protect the rights of children and vulnerable adults from all forms of abuses which happens in all facets of society.

W/R: Five wounded after residents of Ampatano and Kamfakrom ...
42 minutes ago