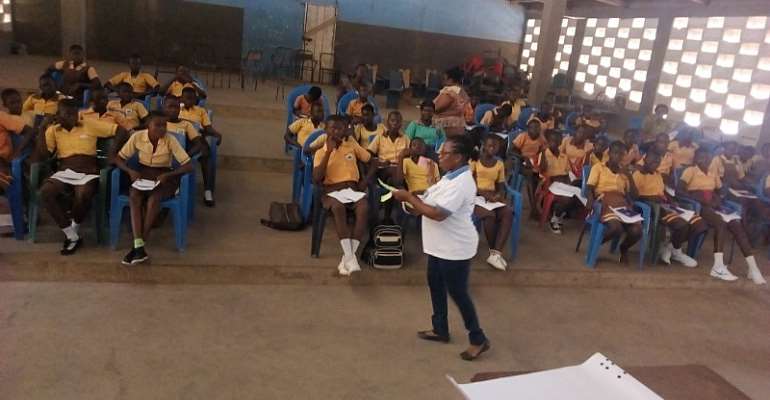 The Upper East Regional Director of the Department of Children, Mrs Georgina Aberese-Ako, has observed that the spate of parental neglect among some families accounted for the major cause of the challenges confronting adolescent girls in the region.

The Regional Director made the observation in the Bongo District on Wednesday when she sensitized about 60 adolescent girls drawn from communities in the District as the part of the mentorship programme being implemented by the Department of Gender under the Ministry of Gender, Children and Social Protection.

She observed that most parents shirk their responsibilities as mentors and guardians to their children and did not pay the desired attention to the growth, development and progression of their children.

This, she stressed, often exposed most of the children to peer influence and making them getting pregnant, committing abortion and dropping out of school jeopardizing their future.

The three year educative programme, which seeks to mentor adolescent girls in six districts in the Upper East Region including the Bongo, Kassena-Nankana West, Bawku West, Builsa South, Talensi and Nabdam Districts, is being sponsored by the United Nations Population Fund (UNFPA).

The implementation is being carried out in collaboration with the Department of Children and the Girl Child Education Unit of the Ghana Education Service (GES).

Madam Aberese-Ako explained that the critical development periods of girls was between 10 and 18 years and added that parents and other stakeholders therefore needed to play crucial roles in order to prevent them from making wrong choices and destroying their future.

She called on parents to be more concerned about the progress of their adolescent children especially girls and offer them the needed advice to enable them abstain from early sex, early marriages, child labour as well as teenage pregnancies.

The Acting Upper East Regional Director of the Department of Gender, Mr James Twene, disclosed that the adolescent girls faced lots of challenges such as teenage pregnancies, abortion, forced marriage, forced sex, child labour among others leading to school dropouts and health complications.

He attributed the cause to lack of the needed knowledge among girls and said the mentorship programme was to build the capacities of 360 adolescent girls in the first phase of the project implementation in the six selected districts in the region to withstand societal pressure and secure for them a better future.

The Acting Regional Director explained that the girls who attended the programme would intend act as change agents and replicate the knowledge acquired to their colleagues at their various communities.

A Primary six pupil of the Namoo Junior High School, Joana Awindongo, expressed gratitude to the Department of Gender and its partners for organizing the programme and said the programme had enlightened her to understand where their issues could be addressed.

She said unlike before when they used to think that as a girl one could not become somebody great in future, the mentorship programme had built her confidence and inspired her to aspire to succeed in life and realize her dreams.