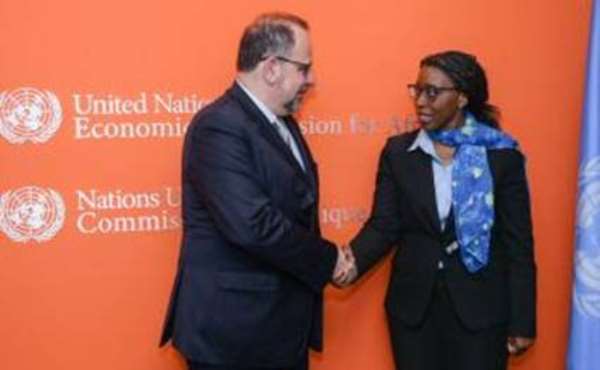 Economic Commission for Africa (ECA) Executive Secretary, Vera Songwe, on Friday met and discussed with a European Union delegation the role of non-state actors in ensuring the success of the African Continental Free Trade Area (AfCFTA).

The EU delegation was led by the President of the European Economic and Social Committee (EU-EESC), Luca Jahier.

Trade, investment, economic growth and migration were at the core of the discussions that came a day after the AfCFTA came into force.

The Executive Secretary highlighted the role of the AfCFTA as an exciting and promising stimulant for economic growth in Africa, infrastructure investments as well as in helping address the economic causes for African migration to Europe, among others. She stressed the number of African migrants going to Europe was much less than what was being reported internationally.

According to Ms. Songwe; “One of the most important impacts of AfCFTA is that it opens the door for funding Africa’s infrastructural needs, whether its railways, highways or telecommunications, or energy. In turn emergence of adequate infrastructure will create value chains that can strengthen old markets and lead to new markets and more jobs.”

The EU Economic and Social Committee takes Africa as a serious trade partner, particularly in the contexts of both post-Lome/Cotonou Agreements, where a great deal of work has been undertaken by the Committee on the Africa, Caribbean and Pacific Groups, Mr. Jahier stated.

“The EU-EESC recognized an Africa that was going through a renaissance. This was evidenced by the new incoming EU Commission which is going to put Africa as its priority,” he added.

The two agreed to work together on concrete ways to amplify the role of non-state actors as implementation of the AfCFTA begins.

In 2018, the EU launched the second phase of the Pan-African Programme to fund projects in Africa at continental or inter-regional level for the period 2018-2020.

The EU-EESC President invited ECA to undertake with the Committee joint activities and cooperate on various aspects of implementing the game-changing AfCFTA, including facilitating dialogue between Africans and Europeans, and working to create the right investment climate for the continent.

The EESC has been the voice of organized civil society within the European Union’s institutional architecture since it was established in 1957. It does not pass laws but brings expertise to EU policymaking by providing advice to the European Parliament, the Council and the Commissions. It EESC provides a forum for discussions between different stakeholders to reach consensus in the public interest.