How About We Legalise Prostitution in Nigeria? 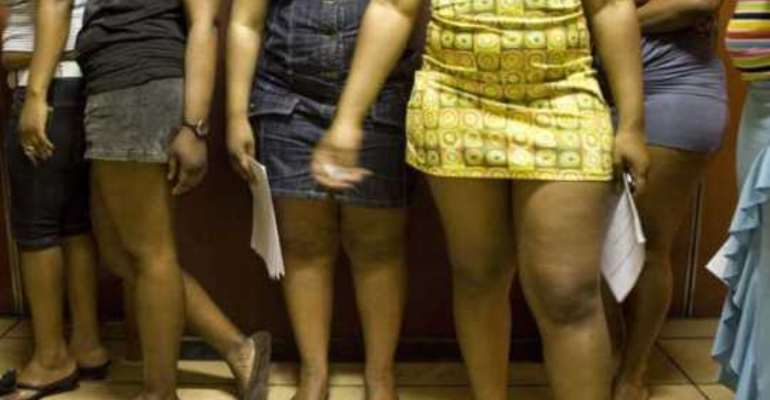 Yes, how about we legalise prostitution? I know that to some people, it sounds off-putting, but what exactly is your grouse against it? You would probably say your religion frowns against it. Or that it belies your pseudo-moralist view of what the right social behaviour should be. Some might even go as far as saying their culture is not in support of it. It’s all crap. I think those are all excuses. You are just making up excuses for you to be nasty; to be discriminatory without being blamed for it. You just want to wear that holier-than-thou toga of bile and blame piddly life situations for your confused and cowardly life.

For some people, publicly condemning prostitution, or sex work, gives them the respect they believe they would otherwise not have; among their friends and families, neighbours and relatives, constituents and party members. It doesn’t matter, even if they only condemn prostitution at day, and patronise a sensuously gorgeous strumpet at night. After all, we are Nigerians! - A bunch of hypocritical people who find respite in putting people down, tearing people’s lives apart in a pitiless excoriating swoop, and blaming all but themselves for their failures in life. As Nigerians, our acceptance or rejection of a thing depends largely on who is doing the thing. It doesn’t matter, whether he’s a wanted drug lord in a foreign country or a degenerate paedophile, so long as he sprinkles his pork barrel 100 Naira notes whenever he drives by that grubby hopeless street - he is a righteous man. It doesn’t matter, if he sleeps with different kinds of strumpets every night, and taunts his followers on Instagram every morning; with a picture of him balling with his well-paid cocottes, so long as he shares recharge cards every day - he is a righteous man.

Even if he is a pastor, who only finds respite in the arms of heavily-paid strumpets at dusk, so long as he dons his Gucci duds at dawn, maintains his expensive fleets of private-jets and Cadillacs, and speaks jargon on the altar every Sunday claiming to communicate with God in 'tongues' - he is a goddamn righteous man! It is of no importance, whether he glorifies these floozies in his music video, or even strips them naked with his pervy little hands while he’s at it, so long as he can dazzle the public with his lifeless beats and create senseless dances - he is a righteous guy living the life.

In fact, it does not matter if he is a seventy-year-old man who has decided to take a thirteen-year-old girl as his new wife, so long as he can fend for the girl and her poverty-stricken family - he is the new Jesus that everyone must worship. Everywhere you look in this country, there are tinctures of normalised things worse than prostitution, but because the persons doing those things have been granted the special prerogative to do as they please, neither the people nor the rudderless lackeys and moral fanatics in the police and other security agencies can be bothered.

You see, we are fake people. We always prioritise the wrong things, demonise the wrong people, and canonise the benevolent devil. And then we complain when the evil we enabled comes home to roost. We forget that we cheered the hydra-headed evil when he decided to mug and grope that random lady in the dark silent streets of Abuja, or the loud jaunty nightclubs for “dressing indecently.” Yes, we forget how we jeered the opposing voices that insisted that the indiscriminate arrests, abuses and tortures of women, in Abuja, dehumanises those we should treat with respect and dignity. We forget, that every time we cheered the beastly Nigerian policemen, the ‘egalitarian’ Social Development Secretariat (SDS), the Abuja Environmental Protection Board (AEPB) and other state-backed institutions going around the city policing morality, we encourage the worst of us to dehumanise our women and girls. We forget that each time this aberration is enabled, we leave the worst evil in the wake of our pseudo-religious and pseudo-cultural fanaticism.

Each week, we see and hear reports of another girl, another mother, another sister; another victim, randomly mugged and arrested, by these dastardly inhumane lots, policing and dehumanising women, citing prostitution as their crime, and their legally-backed license to bestialise the feminine gender. The other day, I was left crashingly distraught, when a friend strolled in to a picnic, crestfallenly, and told me how a young girl of twelve was raped at Jabi-Lake, in Abuja, and upon reporting the unfortunate incident to the police, was given N3, 000 by the police, to return to Lagos and never tell anyone of her ordeal. When my friend found the girl, she was battered and traumatised, dejected and lifeless. She took her in and fended for her; as has become her job for a decade or so now. She too, a victim of molestation and abuse, perpetrated by the same accursed Task Force.

In fine, the twelve-year-old girl was checked into a hospital for medical checkup, alas, her HIV test came back positive. She is twelve; young and innocent. When I paid her a visit at the hospital, she looked deadpan and charred. Although I could tell, she felt loved and cared for, but I wondered if she’ll ever survive the heartbreaking news that she is HIV Positive. We couldn’t tell her. At least, not yet. I couldn’t stop thinking, the compulsory relationship she must now have with the pharmacology. When I asked her what she aspired to be in future, she muttered softly and shyly; “a Lawyer.” I was struck with empathy and sympathy. But I was also happy she would grow to defend the right of others. Although we do not know for sure who raped her, we know for sure that the worthless fellow will meet his comeuppance; whether in this life or hereafter. This is one incident, - one among countless.

The story of the girl above, I believe, cannot be viewed in isolation of the dehumanising operation of the FCTA Joint Task Force in the Federal Capital Territory. Their haphazard arrests of women, public dehumanisation of women, wilful groping and raping of women and a smorgasbord of inhumane abuses, are gradually cascading to a normal thing in the public; a new social behaviour; a new norm that objectifies women and canonises rape and sexual assault against women. The message behind this downright sexist public policy being executed by the FCTA Joint Task Force is terribly pernicious; it is a message that pigeonholes all women in Abuja as prostitutes, and as a result, - undeserving of human dignity and public sympathy. It is truly dangerous and unthinkable, that a woman stands at a very high risk of being harassed or raped, simply because she is a woman and living in Abuja. What’s worse, from the story of the twelve-year-old girl above, a victim of rape and sexual assault is more likely to be dismissed with N3, 000 by the police, or completely disregarded by the Social Development Secretariat as a ‘wandering prostitute’. The dangers of this trend cannot be overemphasised, for this simply means that no woman is safe in Abuja, sex worker or not.

Surely, this evil agenda will not work if the people resist it; if women in Nigeria resist it; if residents of Abuja stand firm against it. But it takes more than resistance. A deliberate effort must be made to correct the jaundiced public perception that a woman who chooses to do as she pleases with her body, is debased and undeserving of dignity. On the contrary, that a woman chooses to exchange her body or vagina for money does not make her debased; it only means she exchanges her body or vagina for money. There are those who trade their vaginas for iPhones and cars. There are those who exchange their vaginas for newly-built houses, and others for a smorgasbord of material things. If this mutually beneficial trade between women and men is considered prostitution, then all women and men are prostitutes. And if all women and men are prostitutes, then both women and men should be arrested by the FCTA Joint Task Force. In the event that this cannot be done, then this anti-women charade, designed to dehumanise women and extort members of the public on a large scale, must be clubbed into demise.

Also, since our laws are presently silent and vague on prostitution, the time to be loud and clear on the issue might be now. In different parts of Africa, prostitution is legal; and in other parts, it is on the rise. In African countries like Sierra Leone, Togo, Mali, Cote d’Ivoire, Burkina Faso, Benin, Namibia, Lesotho, Botswana, Algeria, Zambia, South Sudan, Mozambique, Malawi, Madagascar, Ethiopia, the Democratic Republic of the Congo, and the Central African Republic; prostitution is absolutely legal. In some African countries like Senegal, Tunisia and Eritrea, prostitution is legal and regulated. More African countries are, also, gradually falling in line with the trend of legalising Prostitution. Even in Rwanda where it is currently illegal, a draft of a new penal code that does not prohibit prostitution has been presented for debate in the Rwandan Parliament. All these countries have their cultures and religions to protect, but they also recognise the freedom of humans to make choices and live as they please.

Really, the responsibility of government is not to hogtie citizens to some priggish, pseudo-moralistic, pseudo-religious fanaticism; but to provide an environment where they can freely and safely express themselves. By legalising prostitution, - or sex work as some prefer to call it, - and regulating its framework including stringent punishments for abuses like Child Trafficking, Pimping, and others, we would have: given expression to women who wish to express themselves differently, knocked down the vicious ring of prebendal extortions, and largely crushed the festering and dehumanising anti-women agenda in Abuja and other parts of the country.

Adebayo Raphael is a Human Rights Activist and Development Consultant. He writes from Abuja and can be reached on Twitter via @Asorosobioro.