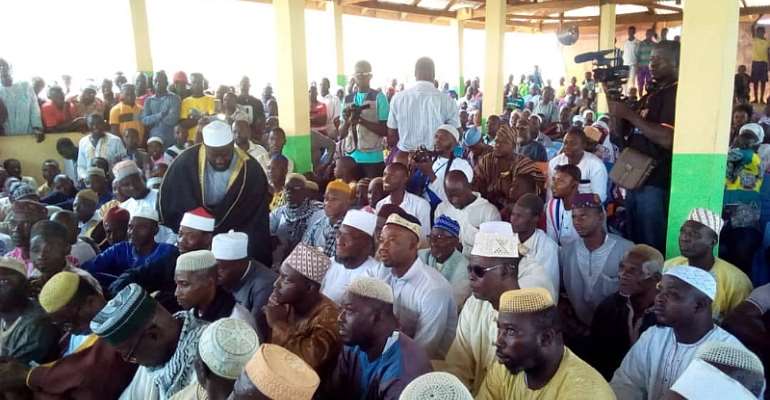 The family of a 35-year-old Abdulai Harisu Boresa in the Bole district of the Savannah region has graciously thanked the Vice President of Ghana, Dr Mahamudu Bawumia for assisting their son to undergo medical treatment in India when he lost consciousness as a result of kidney failure in 2018.

The Vice President was in the area to interacted with the Muslim community in the Bole district capital on Sunday, 2 June, 2019 as part of his Ramadan tour of the Savannah region and the family seized the opportunity to thank the Vice President for such benevolence.

In an exclusive interview with Class news, an elated Abdulai Harisu Boresa said the timely intervention by the Vice President saved his life.

According to him, Dr Mahamudu Bawumia donated 20,000 US dollars through one of his aides immediately the information about his health got to him. Subsequently, he revealed the Dr Bawumia added him 4,000 dollars as pocket money when he was leaving to India for the treatment.

He stated that the Minister for Inner City and Zongo Development, Dr Mustapha Abdul Hamid and the aide, Akbar Khomeini brought the money to him at the Korle Bu hospital.

He narrated as that moment, he was motionless and could not do anything on his own because of the seriousness of the case.

He disclosed that the Minister broke down in tears when he saw his condition and assured him of their unending prayers.

He explained that the kind support enabled the family to send him abroad for the treatment. Adding that, as I speak the Vice is still supporting me ."

"For my health, I am highly indebted to Dr Bawumia" a healthy Abdulai Harisu Boresa stated further.

He prayed that the Almighty Allah will bless him and give him the opportunity to Ghana's President in the near future.

Meanwhile, the Savannah region is the second but last place he is visiting before the end of the Ramadan month. He has also visited the Sawla-Tuna-Kalba district and expected to climax the tour with durbar at the palace of the Overlord for the Gonja Traditional Kingdom, Yagbowura Tuntumba Boresa Sulemana Jakpa I.