Trump lands in UK in a flurry of controversy 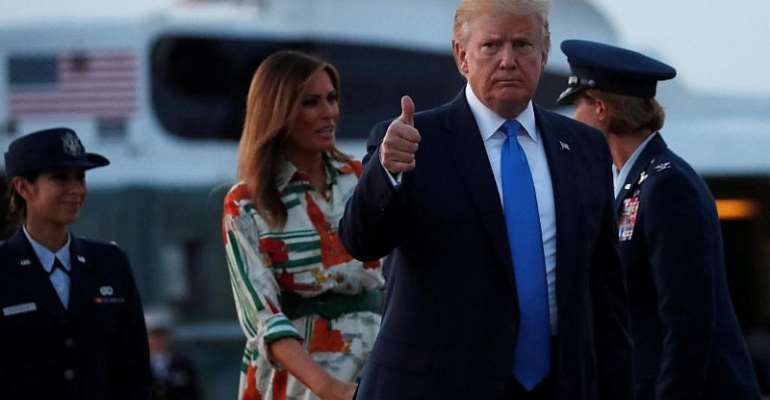 US President Donald Trump lands in Britain today for a three-day state visit amid protests across the country and controversy he stirred by weighing into the Brexit debate. D-Day commemorations and a state banquet at Buckingham Palace are among the activities on the menu.

Air Force One lands at London Stansted Airport at 8 AM GMT where President Trump will be met by UK's Foreign Secretary Jeremy Hunt.

On Monday evening, Trump will be accompanied by US First Lady for a state banquet in his honour at Buckigham Palace. But several politicians are boycotting the event, including the leaders of the Liberal Democrats (Sir Vince Cable) and Labour party (Jeremy Corbin) as well as London mayor, Sadiq Khan.

Protests are planned across the United Kingdom. Thousands of people marched through London in July last year to demonstrate against the visit of the US President to the UK. This year campaigners claim they will mobilise in "huge numbers" in a "diverse Carnival of Resistance [to] reject Trump's divisive politics and policies of bigotry, hate and greed."

In an interview to The Sun tabloid, ahead of his visit, President Trump said that Boros Johnson "would do a very good job" as the head of the Conservative Party.

"I think he would be excellent," Trump added. “I like him. I have always liked him. I think he is a very talented person. He has been very positive about me and our country.”

Before leaving the US, Trump said he might meet Brexit party leader, Nigel Farage. In an interview to the Sunday Times, the US President called on Britain to send Farage to lead the Brexit negotiations.