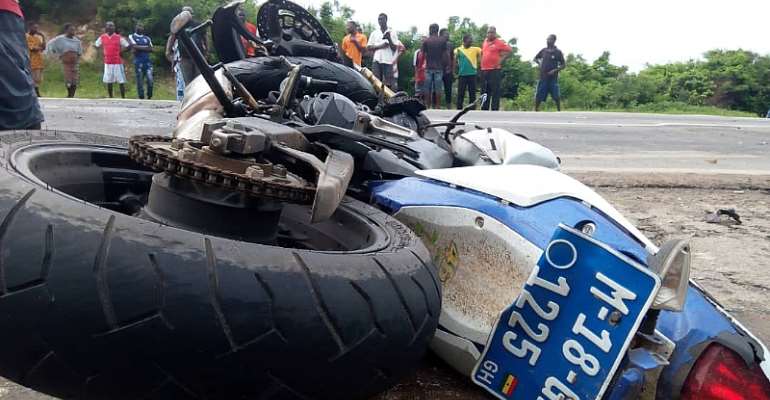 A 26-year-old motor rider identified as Godfred Klutse Jepha met his untimely death at Abandze on the Winneba –Cape Coast highway over the weekend when he got crashed to death.

Godfred who was riding a motorbike with registration number M-18-GE 1225, was said to be overtaking a vehicle ahead of him at a sharp curve when he lost control and crashed into an oncoming Mitsubishi Pajero.

According to eyewitness report, the motor rider somersaulted in the air before landing on the asphalt surface of the busy highway. He died instantly.

Driver of the vehicle, a Mitsubishi Pajero with the number, GS 83-Y, sustained some injuries and was rushed to Saltpond Government Hospital for treatment.

Some of the residents around the area claimed but for the over speeding by the motor rider, the accident would have been avoided.

Kofi Baidoo, an eye witness said, “The Pajero driver attempted to move to the shoulder of the road to give way to the bike rider but the rider lost control and crashed into the Pajero.

He indicated that the rider's phone, had its glass screen crashed hence could not get a contact from it to call any relative or close associate.

“We however, found on him a 2012 voter's ID card with the name Godfred Klutse Jepha”, he added.

The body has since been taken from the scene and deposited at the Saltpond Government Hospital morgue.