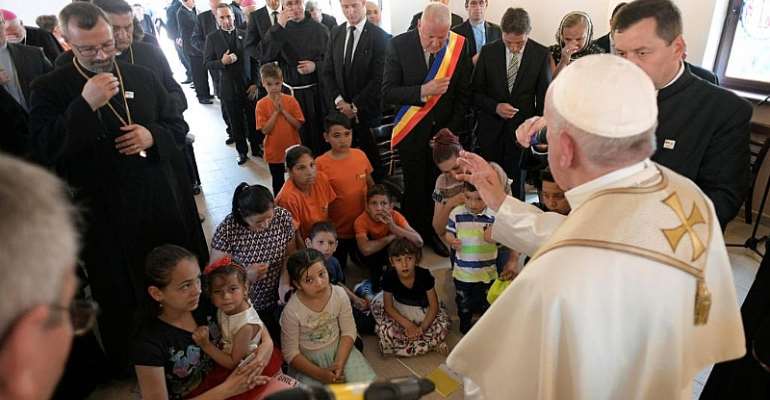 Pope Francis has apologised to the Roma people for the Catholic Church's long history of "discrimination" against them, on the final leg of a three-day visit to Romania.

"I ask forgiveness – in the name of the Church and of the Lord – and I ask forgiveness of you. For all those times in history when we have discriminated, mistreated or looked at you with suspicion," the pope said in a speech Sunday to the Roma community at the last event of his three-day trip to Romania.

The pontiff said his heart was made “heavy” by the meeting in the central town of Blaj.

"It is weighed down by the many experiences of discrimination, segregation and mistreatment experienced by your communities. History tells us that Christians too, including Catholics, are not strangers to such evil," he said.

Earlier on Sunday, the pontiff beatified seven Greco-Catholic bishops of the Eastern Rite Catholic Church who died in prison or because of their harsh treatment during Romania's communist era.

"These shepherds, martyrs of faith, garnered for and left the Romanian people a precious heritage which we can sum up in two words: freedom and mercy," Francis said, while praising "the diversity of religious expression" in mainly Orthodox Romania.

After World War Two, Communist authorities confiscated properties of the Eastern Rite Catholic Church and ordered its members to join the majority Orthodox Church. The result was that most Romanian Catholics abandoned their faith and their community has shrunk to around 200,000 today in a country of 20 million.

The politics, which has seeped through Romania's modern religious history has poisoned interfaith relations – even if the papal visit has softened feelings to a degree.

Roma olive branch irks Salvini
"No matter where we go, to the town hall, to the police or to school, doors get closed," a 72-year-old Roma, who gave his name as Ion, told AFP.

With an estimated population of 10-12 million, approximately six million of whom live in the European Union, Roma people are the biggest ethnic minority in Europe and rights groups say they are often the victims of prejudice and social exclusion.

Francis's visit to Blaj was part of his attempt to include what remains a largely marginalised group.

Although conditions for the Roma have improved in line with the development of the country, which joined the EU in 2007, "nothing has changed" for the poorest communities in urban and rural areas alike, according to sociologist Gelu Duminica, who heads the anti-discrimination Imprenua (Together) association.

In recent months, Pope Francis has clashed repeatedly with Italy's deputy Prime Minister Matteo Salvini on migration issues, even risking Salvini's wrath by inviting a group of Roma to the Vatican. The head of the far-right Lega party has vowed to close all Roma camps in Italy.

Summing up Francis' visit, Roma youth, Razaila Vasile Dorin, told reporters: “It's an honour that a person like the pope comes to our community. We are proud.”