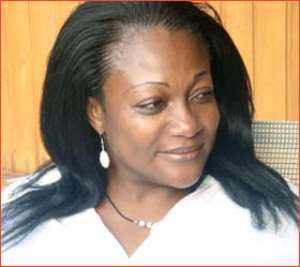 The Executive Director of Henry Djaba Foundation and former Minister for Gender, Children and Social Protection, Madam Otiko Afisah Djaba has derisively slammed those irresponsible men who lasciviously subject their wives who become victims of obstetric fistula to different kinds of abuse. Saying, "It is sad that fistula occurs to only women. In fact, I am praying to God to allow men to also experience fistula so that they can appreciate and respect women who have the condition".

According to her, it was highly unacceptable for any man to victimize, abandon, stigmatize, divorce or chase away their wives on the account of their obstetric fistula condition, which resulted from difficulty or complications in child delivery.

Speaking on her live TV talk show “Let’s Talk Ability” on TV3, Madam Otiko Djaba fumed, after some health experts on the show gave some revealing accounts on how majority of obstetric fistula victims are being subjected to different forms of abuse, torture, discrimination and social exclusion among others mostly masterminded by their own husbands and close relatives.

The renowned international gender activist coached the men to always give the fistula victims much attention, support, care, and love but not to torture them physically and emotionally.

Giving birth to children inarguably is supposed to be a source of great joy and fulfillment of dream for every woman especially those in legitimate marriage. In typical African or Ghanaian setups, many married women have lost their marriages or have been harshly chased out of their matrimonial homes by their in-laws for their inability to give birth to children after years in marriage.

However, childbearing in Ghana and some parts of Africa has become a monstrous journey in the lives of many women as the supposed joyous expedition is now associated with several dangers and complications which most at times frighten many women and limit their interest in having children.

Many women in Ghana have died/lost their lives while giving birth to children. Others have also developed complications during pregnancy such as bleeding from the vagina, sudden swelling of the hands or face, pain in the abdomen, severe headaches, dizziness, persistent vomiting and blurred vision among others which can even be described as “minor problems”.

Some of the women with bacterial, viral or parasitic infections before or during pregnancy mostly face complications resulting from urinary tract infection, bacterial vaginosis, cytomegalovirus, hepatitis B virus, yeast infection, and toxoplasmosis, which is an infection caused by a parasite found in cat faeces and raw meat.

However, one of the dangerous conditions derailing or stunning the pride and dignity of many Ghanaian women in silence is obstetric fistula.

About 100,000 to 150, 000 expectant women in the world suffer from fistula each year with young girls being the most affected.

Obstetric Fistula is caused by prolonged and obstructed labour, which injures the pelvic tissue that raptures the bladder resulting in uncontrollable leakage of urine or faeces.

Many people in Ghana are unaware of the devastating condition which makes it precarious for the victims.

In Ghana, at least 700 new cases of fistula are recorded every year. Majority of women who have this condition are living in isolation due to the rejection and stigmatization they face from relatives, friends, and society, even though it is not infectious.

This condition prevails in all 10 regions of Ghana, but the Northern region has the highest prevalence, followed by Ashanti, Western, Central, and the Upper Regions. Currently, there are two main hospitals which offer dedicated Fistula care - Mercy Women’s Catholic Hospital at Mankessim-Central region and Tamale Fistula Center, Tamale Central Hospital in the Northern region.