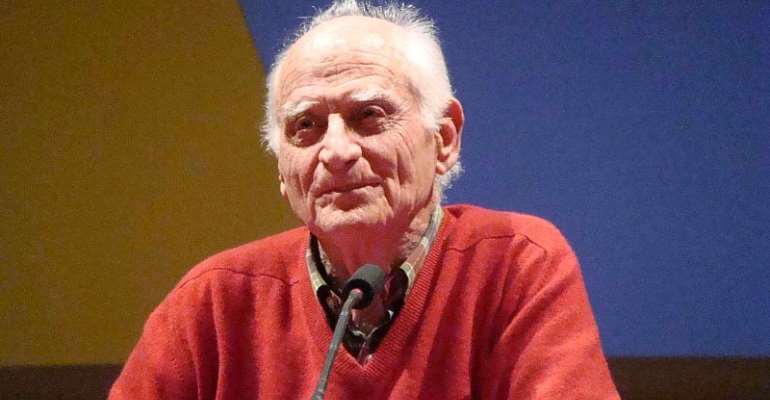 Michel Serres, one of France's leading and most popular intellectuals, has died at the age of 88. He had published more than 80 books, including Petite Poucette in which he encouraged people to live with their time and embrace the technological revolution.

Philosopher Michel Serres was valued and admired in France for his positive reflections on education, ecology and technology.

A writer and philosopher of science, he was one of the 40 Immortels at the prestigious Academie Francaise but was interested in both science and literature and sought continually to break down barriers between different academic disciplines and connect them to new communication technologies.

His most successful work Petite Poucette (Thumbelina) sold 265,000 copies. The title, a cheeky reference to young people texting with their thumbs, explores how the digital revolution has created a huge rupture in knowledge and way of life, cutting the younger generation off from nature. Yet far from crying au secours Serres argues the texting, tweeting, Instagramming world is in fact better than the one it is replacing.

He continued in a similarly disruptive vein in the 2017 C'etait mieux avant. It translates as 'it was better in the old days' and cheekily seeks to prove the opposite. “I was there,” he writes in the introduction, “we had Franco, Hitler, Mussolini, Stalin, Mao.. all those courageous men”.

“If you look globally at what's happened over the last 10, 20 even 100 years, violence is on the decline,” he said recently on Le sens de l'info – a popular radio show he co-hosted for the last 14 years. “It seems almost counter-intuitive to say this, no one believes it!”

Some people didn't and don't, but many want to and have found his ideas both stimulating and welcome in our anxiety-inducing modern times.

When in March this year he was asked to comment on the Yellow Vest protest movement and the consultative national debate that was aimed to answer its grievances, he told France 5 television the country was “in a crisis” and that it “couldn't be resolved quickly”. But he believed in the new world we were entering.

“We're in the middle of a transformation and it's painful…just like a woman in labour suffers a lot of pain. We're in pain because we're giving birth to a new world and that's what's interesting.”

Lucky to live through four or five revolutions

Serres set out studying mathematics at the Naval Academy, crossed the Atlantic and Mediterranean but turned to philosophy at the end of the 1950s after discovering Simone Weil's Gravity and Grace.

He attended the prestigious Ecole Normale Superieure, did his thesis on the philosophy of Leibniz, and was appointed a chair in the history of Science at the Sorbonne.

When, in 1991 with the Gulf War raging, he was officially admitted to the Académie Française, he left the habitual sword in the locker room “as a sign of peace”.

He remained guided by a belief in the importance of interweaving the history of science with mathematics, Balzac, Proust, and ultimately social media, into his writing and reflexions.

“I have been lucky enough to live through four or five revolutions,” he told French public television in March this year. “The IT revolution in Silicon valley, the mathematical revolution with modern mathematics, the biological revolution via bio-chemistry and so on. As a result I'm used to thinking about current times in terms of what could happen and what will happen.”

“We live on a new planet, it's simple. In the past we cried over our finiteness in an infinite universe, now we are infinite in a finite world.”

Model of a French common person
Serres published some 80 works, several of which are available in English. On its website, his long-standing publisher Le Pommier describes him as a “tireless traveller of thoughts”. But he travelled physically as well as mentally.

In 1984 he became a visiting professor at Stanford University and gave passionate tutorials.

Interviewed on campus by Cynthia Haven in 2011 (see video below) he said: “my job is to become an ambassador of French culture. I give to America a sort of example, a model of a French common person”.

Common? Perhaps not. But Serres did like to express complex ideas with ordinary vocabulary that a large public could relate to.

A particular passion and thread throughout his work was exploring the nature of time.

In Conversations on Science, Culture and Time, an interview he gave to Bruno Latour, he uses the metaphor of a handkerchief to convey how we might better understand time – or le temps (which in French also means "weather").

“If you take a handkerchief and spread it out in order to iron it, you can see in it certain [measurable] fixed distances and proximities,” he explains.

He then suggests we take the handkerchief and crumple it our pocket. “Two distant points suddenly are close, even superimposed.”

“As we experience time – as much in our inner senses as externally in nature, as much as le temps of history as le temps of weather – it resembles this crumpled version much more than the flat, overly simplified one.”

Serres maintains that from our earliest moments the notion of time is important, although, as he told Haven, not all cultures see it in the same way.

Time for rugby
Serres was born in Agen in the south west of France and remained attached to the region and its rugby club.

In a tweet on Sunday the club expressed its sadness at losing the "most famous of its supporters”. And quoted Serres own words to just how passionate he was about the game and his origins in the south west of France.

"I'm from Agen via the Agen XV club, it's my totem, part of me, my group and me together, our religion, our history and our gods!"