The Church Must Be Regulated! 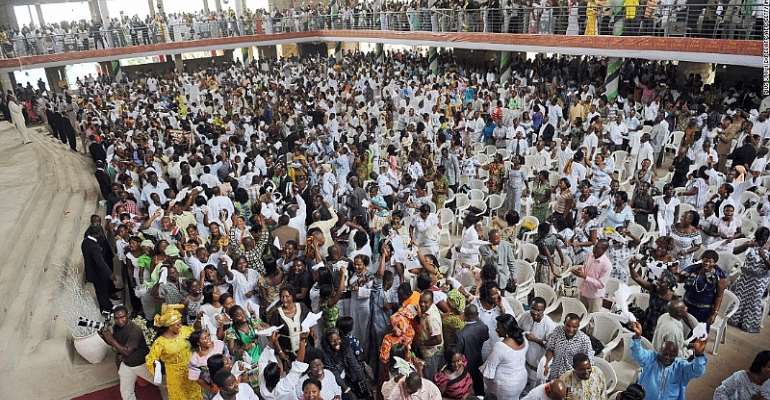 Even if the current Parliament fails to regulate the church in Ghana today, it will be done in the future Parliament to protect the interest of the numerous unsuspecting vulnerable Ghanaians.

Humans are wicked, brutish and are driven by personal gain. It is only legislations, the rule of law and a threat to punishment that keep people in check. The Legislature, Judiciary and Executive are gate keepers to civility. They must be allowed to work.

This regulation should not only be limited to activities of Churches but the activities of the so-called “men of God” outside the church as well as that of Malams and Fertish Priests. There is so much noise, indecency and extortion by most of them.

Why should the street become another church by all means, and that people must drop their offertory in that little box strategically placed right on our faces on the street for another blessing on a Monday morning after Sunday church service?

We watch pastors compete with street vendors for space everywhere as if the word of God is for sale. They invest so much in procuring the loudest of PA systems to attract the best of attention from the public with most of them using the most vile and abusive language on people in the name of the "word of God". These people must be regulated, their time is up. We must restore sanity in the church and on the street of Ghana.

This matter is a national security issue and should not be handed to the Christian Council to manage. Many of them have stated categorically on several occasions, that they don't answer to the Christian Council but to God. These uneducated, arrogant and abusive pastors don't listen to anybody except themselves. We watch them tag helpless old ladies as witches, stepping on pregnant women, openly pronouncing people dead by certain dates and causing unnecessary fear and panic with impunity. I listen to some senior pastors who describe them as fraudsters and criminals. We watch them descend on leadership of the Christian Council and openly berate and run them down and nothing happen to them. They have appropriated God to themselves and makes it appear the rest of us who don't preach the word of God are demons. The only window of hope must be legislation by the state complimented by strict enforcement of these laws to restore sanity in our churches and on our streets.

Unregulated freedom is a recipe for insanity and chaos and that is exactly what we are witnessing now. But isn't it surprising that the Ghanaian has suddenly become "more Christian than the Pope himself"? There was no religion like Christianity in Africa within the first Century of existence of humanity, yet the Blackman lived peacefully with himself and communicated with his God in prayers.

What we do in Africa and in Ghana today with the name of Christ Jesus will not be tolerated in churches in the UK and on the street of Landon. The difference between the dupe, reckless and abusive pastor in Ghana and the responsible pastor in UK is regulation.

We observe helplessly as half-educated and complete illiterates intimidate innocent and vulnerable Ghanaians with the Bible. They extort their church members and the general public and acquire luxurious properties and turn to flaunt them on our faces telling us how stupid and unsuccessful we are in life.

Churches have become people's family businesses. They make so much money from it, they don't account to anybody, they don't pay tax to anybody and when you ask, they say it is God's money.

Churches must not only be regulated but be taxed too. We need this regulation as early as yesterday!