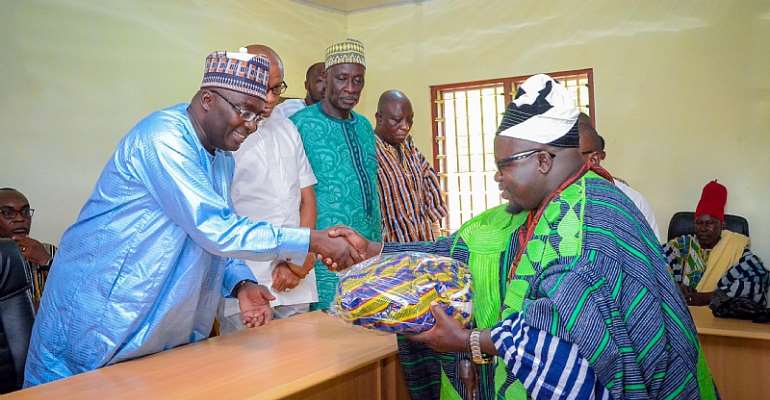 A number of chiefs and their people in the Upper West Region have hailed the Akufo-Addo government for implementing programmes that continue to transform their lives.

At separate mini durbars on Saturday, 1st June, 2019 the chiefs and people of Tanina, Bulenga and Tabeasi in the Wa West, Wa East and Daffiama Bussie Issa districts respectively all lauded government for its targeted approach to ensure inclusive development which have a direct, positive bearing on their daily lives, which revolves around agriculture.

Government's policies received a thumbs up when the Vice President of the Republic, Alhaji Dr Mahamudu Bawumia called on the chiefs as part of the 2019 edition of his annual Ramadan tour of the Upper West region.

“We the chiefs and people of Daffiama Bussie Issa district and the Tabeasi community particularly wish to thank the government led by his Excellency Nana Addo Dankwa Akufo-Addo, President of the Republic of Ghana and your good self, the Vice President Alhaji Dr Mahamudu Bawumia for the good work you are doing for the people of Ghana, “Alidu Kaakuu Spokesperson for Chief Maaliba, stated.

“About 97 percent of us in the Daffiama Bussie Issa district are farmers, and we are proud about your flagship programme Planting for Food and Jobs. Mr Vice President, I'm glad to tell you that this flagship programme is actually touching the lives of the poor peasant farmers and we are very grateful about that. We also commend you for implementing the One Village One Dam programme, which will help us to farm all year round. We are very happy about that.

“Another flagship programme we are enjoying now is the Free SHS programmes that we the farmers in the region as well as DBI constituency are proud of because it is touching the Smallholder Farmers and their lives are improved and we are very grateful.

“You have implemented a lot of programmes and my chiefs and Imams want me to tell you that we will support you to implement these flagship programmes so that we the Smallholder farmers will actually benefit from this programme. We are proud of you.

“Another thing we are very happy about is that although it is Ramadan, you have taken the initiative to come here to pray with us. This is the first time apart, from years back when President Rawlings visited this community, you are the first 2nd Gentleman who is visiting this community.

Echoing Vice President Bawumia's crusade for religious acceptance and co-existence, the chief of Tabeasi noted, “When we are talking of development let's forget of Party A or Party B. I've been listening to you so much and I'm proud of your approach to the Islamic community and the way you are going with your work. The Chiefs and people of Daffiama Bussie are proud of you.

At earlier meetings with the chief of Tanina, Sadik Gbele, and the Bulenga Traditional Council, led by Naa Seidu Nawologime IV, the chiefs expressed similar sentiments, with Naa Seidu Nawologime expressing delight that with the construction of a major storage facility under the One District One Warehouse programme in the district, he would no longer have to worry about his sweat going to waste because there was no way of storing the yield from farms.

“Our children are also going to school for free now, which has removed a major burden from our shoulders,” he added.