Why I forced Scientist Dongen And Dr. Geisler To Join Me On ModernGhana News 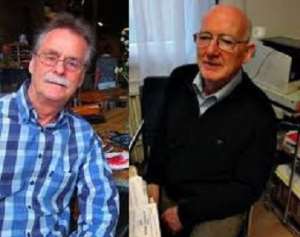 Long Walk To Freedom- the book, which reflects the life of one of the greatest leaders of the 20th century, Nelson Mandela, his secrets of success, the guarantee of self-confidence and the need to fight, while maintaining optimism, leading him to become the president of South Africa, after 27 years of incarceration, is a great memoir but the entire African continent still needs A Long Walk To Freedom.

The sad history of Black Africa, wouldn’t have advanced from slavery to colonialism, Apartheid and then to man-made diseases, (biological weapons) Aids and Ebola if the continent of Africa has strong efficient leaders who care about the health and safety of Africans. This is the time for every health-conscious African to ask himself why what is not possible in advanced countries is always possible in Africa.

Ninety percent of the wicked leaders of the world come from Africa. We shouldn’t think because the so-called emperor Bokassa of Central Africa was an evil man, therefore, we don’t have those type of leaders in Africa no more. We shouldn’t say that because the evil Idi Amin of Uganda, fled and died in Saudi Arabia, therefore, this kind of leaders are no more in Africa.

That’s the reason; the same perpetrators don’t have respect for African leaders. The advanced world knows that African leaders are corrupt, like an addicted-alcoholic, they can be silenced with money after each crime on the continent. In fact, instead, of holding the west and the US government responsible for slavery, colonialism brutalities, Apartheid, Aids and Ebola, we should rather hold African leaders responsible because they made it possible.

From the time of slavery till now, Britain has allied with the United States of America to decimate Africa with man-made diseases such as Burkitt’s lymphoma, Nodding disease and Kaposi’s sarcoma, yet, British Prime Minister, Theresa May was angry with Vladimir Putin, according to her, the Russian leader is responsible for the nerve gas used on British soil in an attempt to kill the Russian spy Sergej Skripal and his daughter in Britain. Yet, no world leader, including African leaders, except Thabo Mbeki, did protest about the deliberate use of biological weapons Aids and Ebola in the African population.

Two years ago, when on the path of medical investigation to find out if truly Aids and Ebola are biological weapons to kill Africans, I went to see the Dutch scientist, Johan Van Dongen, in Holland and Dr. Wolff Geisler, in Germany. When I started publishing the feature articles pertaining to those medical crimes on ModernGhana news site, some people attacked me, some saying I live on a drug.

The fact that people those attacking me, trying to make a true article look false, forced me to invite scientist Dongen and Dr. Geisler to join ModernGhana news. They weren’t prepared to do it, yet, I forced them to put the interest of poor Africans into consideration because the leaders are helpless and, therefore, wouldn’t like Africans to know the truth.

The US government has committed so many horrible crimes around the globe but always afraid to have a taste of their crimes. Even after the Ebola explosion in Sierra Leone, Guinea, Liberia and Congo, the government has quickly distributed Ebola detector devices throughout the fifty states of the United States of America.

African leaders are very cruel to the extent that they have collaborated with the World Health Organization, the Centers for Disease Control and the US government to appoint Dr. Tedros Adhanom Ghebreyesus as the World Health Organization, to lie that bats are responsible for Ebola in Africa. How do African leaders expect the continent, already killed by foreign powers to resurrect?

If the International Criminal Court in The Hague is not corrupt, they should have arranged the US government to face trial in Africa for medical genocide on the continent of Africa, instead, they hunt for war criminals in Africa to face trial. Whatever is not going right in any African country is the fault of the leaders because they have collaborated with developed world leaders by accepting money, grants, allowing them to continue decimating the African continent through food and medication.

We deserve it, Africa, Ghana, we deserve it. We shall continue to suffer because our politeness and respect have been taken as stupidity. I will end this unusual long article with the words of Nico C.M. van Staalduinen, at the Consulate of Bulgaria to the Republic of Ghana:

“Nobody needs to be anybody's slave if you stand up on time! One of the problems is that Africans are too polite, too patient and only stand up when finally walked over and then exploding in violence. Stand up on time, at the first attempt of anybody to push you down and all will well.”