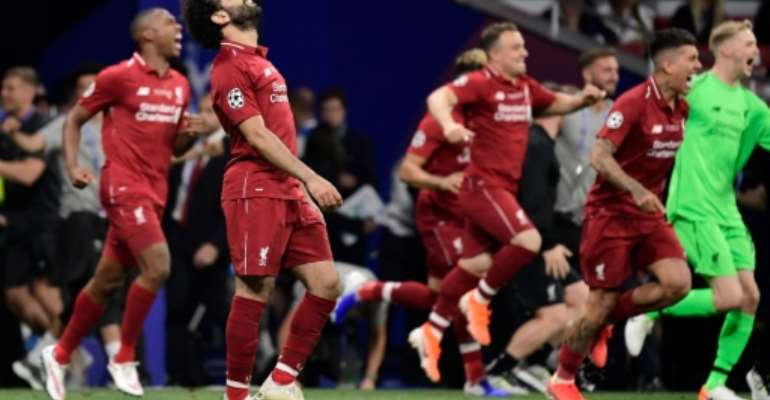 Mohamed Salah scored the opening goal as Liverpool banished the pain of last year's defeat in the final. By JAVIER SORIANO (AFP)

Mohamed Salah expressed his delight at playing a full role in Liverpool's 2-0 Champions League final victory over Tottenham on Saturday, after injury ruined his night against Real Madrid a year ago.

The Egyptian went off injured and in tears during the first half of last year's final after hurting his shoulder during the 3-1 loss to Real.

"Everyone is happy now, I am glad to play the second final in a row and play 90 minutes finally," Salah told BT Sport.

"Everyone did his best today, no great individual performances today, all the team was unbelievable."

Salah scored the second quickest goal in the final of the modern Champions League, blasting home a penalty less than two minutes into the match following a handball by Moussa Sissoko.

"I have sacrificed a lot for my career, to come from a village to go to Cairo, and to be an Egyptian at this level is unbelievable for me," said Salah.

"This is a moment I'll never forget, it's a great moment for the club and for the city," Origi told BFM.

W/R: Five wounded after residents of Ampatano and Kamfakrom ...
46 minutes ago