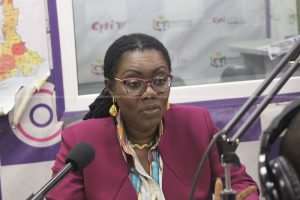 The Member of Parliament for Ablekuma West, Ursula Owusu-Ekuful, has cut the sod for the commencement of works for the construction of roads within her constituency.

One of the roads, the Western Link Road, upon completion is expected to ease the current pressure on the very busy Dansoman highway.

Besides the construction of new roads, deteriorating roads would also be repaired and rehabilitated.

In her address, Ursula Owusu-Ekuful, who is also the Minister for Communications, announced that the entire project will be completed by the end of the year.

“It is not just this western link road which is going to be constructed but about 25 kilometres of asphalt overlay is also going to be done in addition to it, which will give Dansoman and the entire constituency a whole facelift. We are confident that, the work will be done quickly to a very high professional standard and it will alleviate the suffering of a large section of our people,” she said.

In 2017 the Ministry of Roads and Highways said it had started receiving bids for the patching of potholes as well as sectional repairs on the 253 trunk roads nationwide and said the government was in the process of awarding contracts for the repair of some 253 roads which are believed to be in deplorable condition.

In 2018 President Nana Akufo-Addo admitted that the country is faced with the challenge of bad roads and assured Ghanaians he will put in the needed measures to repair all the major poor roads in the country.

In his opening address at his media encounter, the president said his regional tour has helped him to have first-hand information on some of the challenges confronting us

On the other hand Leaders of the Ningo Prampram Youth for Development met on Friday to deliberate on their next date for a massive demonstration over poor roads after the first yielded no positive results.

Residents of Dawhenya in the Ningo Prampram District of the Greater Accra Region have repeatedly complained about bad roads in the area.

They had given the government a 14-day ultimatum after an initial demonstration, and that deadline had elapsed.

According to the group, several letters to the Assembly to have their roads fixed have yielded no results hence their decision to embark on another demonstration.