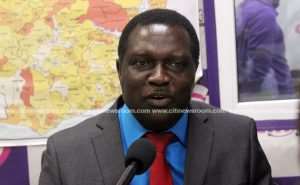 “It might have become so difficult for GES to enter the data into the system. It has been a nightmare for us because when teachers are not being paid, eventhough it is hurting them, it is hurting us more.

“If a teacher does not have money, we may have a situation where that person does not have money for transportation and may not show up in school so in the long run, it is hurting the children and the Ministry of Education so we have had meetings to make sure as many of them are in the system. We will do everything possible to make sure they are paid.”

According to the Deputy Minister in-charge of Basic and Secondary Education, Dr. Yaw Osei Adutwum, the ministry is aware of the arrears owed the teachers and is working to settle them as soon as possible.

Last week some affected teachers in the Upper West Region besieged the regional directorate of the Ghana Education Service, to demand their salaries.

But Dr. Yaw Adutwum has appealed to all the affected teachers to exercise restraint as the ministry takes steps to rectify the problem.

He said the situation is seriously affecting the ministry as it is concerned that some teachers may be absenting themselves from school due to the non-payment of their salaries.

About 8000 teachers recruited by the government to facilitate the implementation of the controversial double track system under the Free SHS policy, have not been paid their salaries five months after their employment.

The Ghana Education Service, which is in charge of processing of the newly recruited teachers for their biometric data to be captured and staff identity cards issued them, is said to be dragging its feet in the exercise.

Of the three processes required, the new teachers have completed only one, which is the filling of what they termed IPPD forms. They are yet to undergo biometric registration and to be issued with their ID cards.

According to the teachers who form the Association of Newly Recruited Teachers (ANRT), they have met the Education Minister Mathew Opoku Prempeh twice on the non-payment of their salaries, but there appears to be no hope in sight for them.