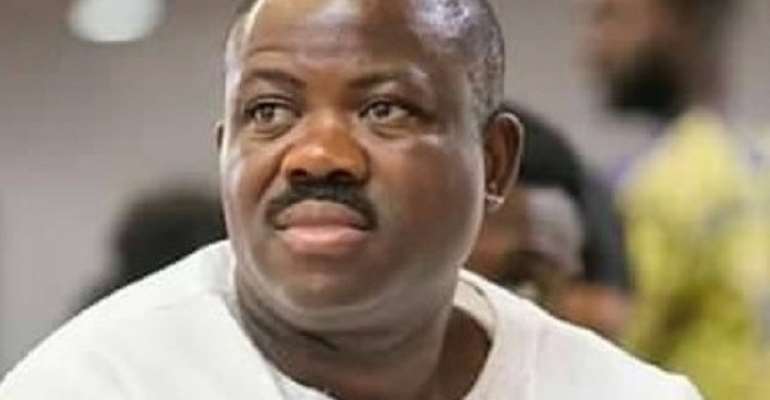 Mr Joshua Akamba, the National Organizer of the opposition National Democratic Congress (NDC) has said, the plagiarism and subsequent apology by the Ghana Beyond Aid committee on the photoshopped Kenyan Skyline building, exposed President Akufo-Addo of deceptive policies.

President Nana Addo Dankwa Akufo-Addo on May 1 2019, launched the "Ghana Beyond Aid Strategic Document", which he claimed would guide the nation towards an irreversible pathway of progress and prosperity.

The document put together by a committee led by the Senior Minister, Mr Yaw Osafo Marfo depicted high rise buildings over green landscape.

Among those high rise building showcased by the government indication how Ghana would look after the implementation of the Ghana Beyond Aid, is the headquarters of Dawit Insurance building far away in East Africa nation, Kenya.

This however attracted mockery by many Ghanaians and other nations citizens, as the image used to decorate the cover page of the document proved to be skyline of Kenya.

Following the expose and mockery, the Ghana Beyond Aid Committee through their Secretary, Dr Eric Yeboah issued a statement apologizing to Ghanaians for what turned out to be a deceptive and disgraceful act by the committee.

But commenting on the issue with a write up making rounds on social media, the NDC National Organizer described the Akufo-Addo led New Patriotic Party (NPP) government as an apologetic one.

Mr Akamba recounted the number of times the government "changes plagues and names on projects they didn't build, publishing names and pictures of existing factories as part of their unaccomplished 1 D 1 F and renaming existing structures/institutions to make it look as though they've done something new."

He contended that the NPP has deceived Ghanaians with lofty promises but could not fulfil them, hence the appetite to replicate same even when the people gave them the opportunity.

The NDC National Organizer also expressed the fact that these unfortunate happenings keep reoccurring in spite of the numerous apologies rendered to Ghanaians by other appointees of the Akufo-Addo led government in the past.

He called on Ghanaians to remained citizens and not spectators to scrutinise any form of policy brought by the current government for the possibility of plagiarising other people's work.