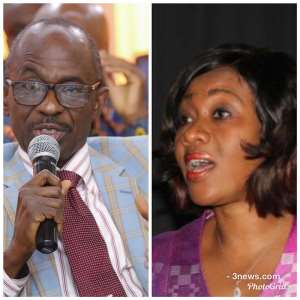 Johnson Aseidu Nketiah, General Secretary of the opposition National Democratic Congress (NDC), has expressed concerns about schemes by the Chairperson of the Electoral Commission, Jean Mensa to manipulate the national voter register database.

According to him, Jean Mensa has has prepared documents to hand over the database of the voters’ register to a Ghanaian Company.

He said, the explanation given by the EC Boss that the country is not ready to hand over its sovereignty to a foreign company to manage Ghana’s voters’ register database, are just schemes to ultimately to control the voters’ register.

The NDC General Secretary claimed the EC boss has gone in for a Ghanaian owned company to take over the STL job of managing the database of the voters’ register.

He said, the people behind the company that Jean Mensa hand picked are people whom their political affiliations is known.

The EC Boss, General Mosquito said wants to cancel the STL deal and hand over the key to a Ghanaian owned company to manage the database of the voters’ register without discussion same with the stakeholders.

The NDC scribe expressed shock at the way and manner Jean Mensa the Electoral Commission (EC’s), stressing that the EC proucements that the 2020 elections would not be rig is contrary to her moves at the Commission.

Mr Aseidu Nketiah stated, it was impossible for the NDC as largest opposition party to agreed that the moves by the EC Boss would not lead to someone changing results of elections.

In his view, any time Jean Mensa speaks, she ends up exposing herself to criticisms.

He added that the stance of the EC Boss that Ghana is a sovereign and independent country whilst a foreign company controls our exit and entry of our database is wrong .

Jean Mensah, he alledged has already prepared some documents to hand over the database of the voters’ register to a Ghanaian owned company and challenged her to prove him wrong if it was on the contrary.

General Mosquito said, the EC Boss do not intend to make the election process transparent for free and fair polls , hence the schemes to deny the political parties information on any decisions taken on issues.