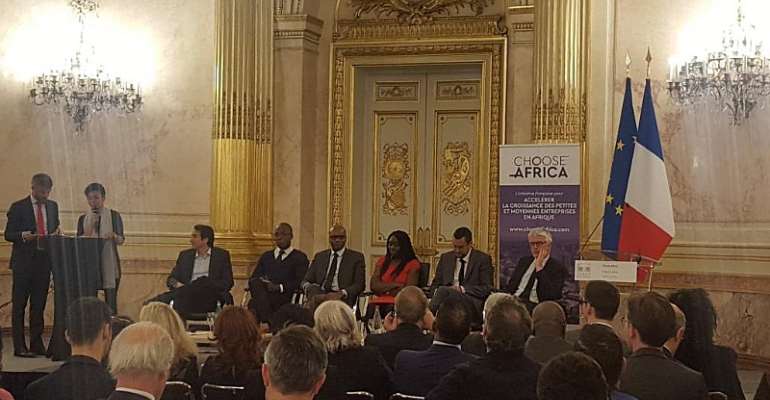 France is to invest some two billion euros into African start-ups over the next three years in a bid to unlock the continent's untapped potential. A new initiative called Choose Africa aims to empower the private sector to drive economic growth, increasingly driven by entrepreneurship. The problem is that entrepreneurs lack funding and resources.

"Africa is the continent of entrepreneurs," organisers of the Choose Africa initiative hammered home last Tuesday to a room packed with MPs, potential investors and many of the continent's innovative young players. "The problem is money."

The French-led intitative, modeled on its counterpart Choose France, has pledged a 2.5 billion euro investment into 10,000 small and medium sized companies by 2022 to drive growth.

“The Choose Africa initiative is based on the speech that President Emmanuel Macron gave in Ouagadougou," explains Damien Braud, head of private equity at Proparco, the private sector arm of France's Development Agency.

In that iconic speech in 2017, Macron vowed to build a new partnership with Africa founded on mutual interest.

The aim is to boost the attractiveness of doing business on the continent by unlocking its potential. Africa's entrepreneurs are pivotal to that.

Ecosystem
"There is a growing number of start-ups and entrepreneurs that have innovative ideas and are trying innovative business models that offer financial and digital services that are extremely important for the development of the continent," comments Khaled Ben Jilani, a senior partner at private equity firm Africinvest.

Start-ups such as the Rwandan Flyzipline that delivers medicine by drones to people in isolated areas, have shown the potential of African tech to offer solutions "not just for African problems, but for the global market," Jilani told RFI.

However, around 87 percent of start-ups and small businesses lack funding, and many go bust in the first few years.

"To pass from the idea to success, an entrepreneur needs an ecosystem," comments Karim Sy, chairman of Digital Africa, which connects French and African business players.

Set up last year, the online platform has received 65 million euros in funding  from the French government as part of the Choose Africa initiative.

"There is a need for finance yes, but when the entrepreneur gets his idea, he then needs to structure it, develop a prototype, go to market and then scale-up. At each phase of the path of entrepreneurship, he has different needs," Sy told RFI.

Scramble
For one entrepreneur, Folly Koussawo, the path to success was far from easy. Koussawo quit his life in France to set up a construction company, Trianon BTP, in Gabon seven years ago and has not looked back since.

“To start Trianon we had two difficulties. One was finding funding, the other was talent," Koussawo told RFI.

Koussawo set up the company, which today employs more than 200,000 people in Gabon, Côte d'Ivoire and Senegal, with 100,000 euros acquired from his savings. The rest came from the IEP investment fund, one of a number of investors queueing up to take advantage of Africa's untapped potential.

Indeed France joins a scramble of foreign investors such as China for influence on the African continent. However, Proparco's Braud insists that French interest is rooted in "cooperation," and that any investment made is shared with local actors on the ground.

"When we finance a bank, an entrepreneur, an investment fund, we don't do it on our own," he commented.

For Koussawo's part, the main winners of this new scramble can be Africans themselves.

"The African continent is really the future," he reckons. Although "I loved what I did in my construction companies in France, I realized that I can have more impact in my country and in my continent and I decided to go back to Africa."

Those in the diaspora "should do too, because the potential is really, really big," he said.

2020 WASSCE Performance Puts Akufo-Addo Ahead Of Mahama – Ad...
53 minutes ago