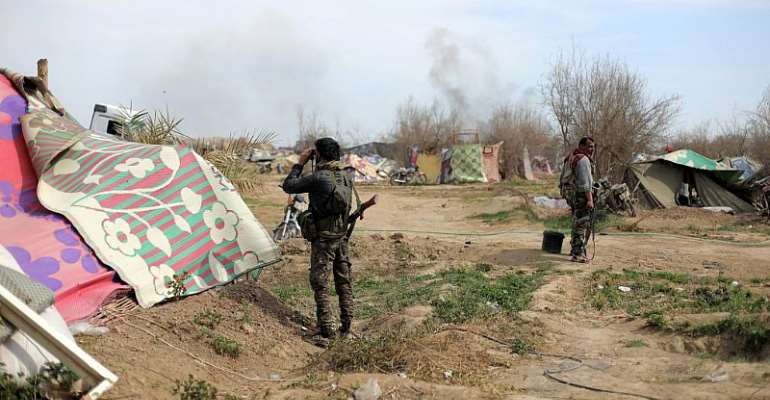 Two more French members of the Islamic State armed group have been sentenced to death by a Baghdad court, bringing the number of condemned French citizens to six.

The two who were handed the sentence on Tuesday were identified as Karam El-Harchaoui and Brahim Nejara.

The French government is working to prevent the condemned men from being executed, according to French Foreign Minister Jean-Yves Le Drian.

"We are multiplying efforts to avoid the death penalty for these French people," he said on France Inter radio, adding that he had spoken to Iraqi President Barham Salih about the issue.

France has not tried to repatriate captured French IS fighters and Le Drian says that IS members should be tried where they committed their crimes.

Captured by SDF fighters
There are 12 French Islamic State fighters who were captured by the Kurdish-led Syrian Democratic Forces (SDF) in Syria and transferred to Iraq in January, just a few among the hundreds of alleged IS members they have already handed over.

The French government accuses Nejara, 33, and El Harchaoui, 32, of working to send IS jihadists to Syria.

According to an Agence France Presse newswire reporter at the trial, the judge questioned Nejara in Arabic, who responded in French.

“I left France and drove my car to Syria in 2014; my wife, my daughter, and my brother-in-law were with me,” the translator told the judge in Arabic.

In 2014, the self-proclaimed 'caliphate' called on their supporters to profess their allegiance to the group.

Nejara was called Abu Suliman al-Tunsi while with the group and appeared in a propaganda video after the 2015 Paris attacks, according to the Paris-based Centre of Terrorism Analysis (CAT). He has Tunisian origins and is from the Lyon area in France.

The CAT added that Nejara was an associate of Foued Mohamed-Aggad, one of the terrorists who attacked the Bataclan theatre in Paris in 2015.

El Harchaoui, the other condemned jihadist, was reportedly visibly stressed in court.

“I never went to Iraq and I never participated in any combat neither in Syria nor Iraq,” he said, claiming he is innocent.

He told the judge that he was unemployed and went from Brussels to Syria. He also said that he had two wives there, one after the other, and both were Belgian.

Hundreds on death row
In Bagdad, more than 500 foreign IS recruits, including women, have been sentenced to death, but none have yet been executed. They include two Belgians.

A German woman had been given the death penalty, but after appealing the sentence, she was given life in prison.

Out of the six French IS members who have been condemned to death, one, Leonard Lopez, said he would appeal.

Iraqi law allows the death penalty to be handed out to anyone who joins a “terrorist” organization, no matter if the accused fought or not.

A number of human rights organisations have called the Iraqi IS trials based on weak evidence.

Reopening Of Schools: Not Testing Students, Staff Dangerous,...
56 minutes ago