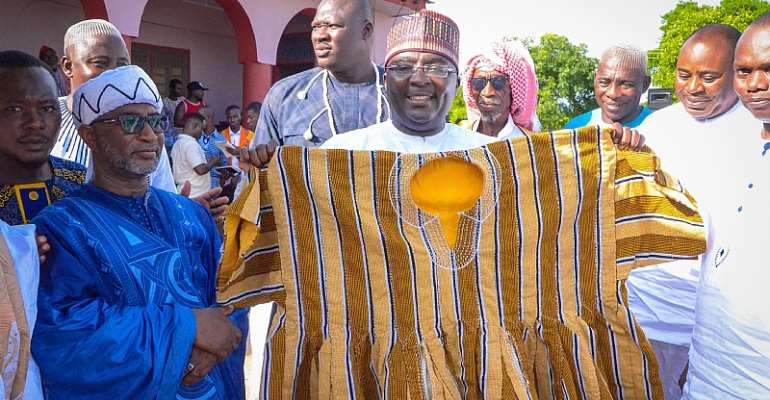 Chiefs and people of Menji in the Tain District of the Bono Region have enstooled the Vice President of the Republic, Dr Mahamudu Bawumia, as Nkabomhene (Unity Chief) in recognition of his enduring crusade for unity and peaceful co-existence of persons with different religious persuasions.

The leadership of the Muslim community have also conferred a special award on him for his ongoing efforts to champion the cause of the poor and underprivileged.

The honours were conferred on Vice President Bawumia at Menji near Nsawkaw on Monday, 27th May 2019 at a mini durbar organised by the chiefs in conjunction with the Muslim community after the Vice President joined Muslim faithful to perform the Zuhr prayers at Menji, as part of his annual Ramadan tour.

Speaking on behalf of the chiefs, the Gyaasehene of Menji, Alhaji Amadu Bamba, said Vice President Bawumia’s quest to ensure peace and unity between persons of different religious beliefs, which is reflected in his annual Ramadan Tour, is a sign of his peaceful nature.

The revolution that has occurred in the annual pilgrimage to Mecca since Alhaji Dr Bawumia became Vice President is also remarkable, Alhaji Bamba indicated, adding “although I have been to Mecca before, I want to prepare and go again because of the good things I’m hearing. Those who have gone since you came into office say that unlike the past, now they don’t hustle to get food but are now fed very well.

“In appreciation of his quest for peace, unity and national cohesion, and the great work he is doing for the nation as Vice President, the chiefs of Menji and Tain are enstooling him, with the stool name of Nkabomhene” Alhaji Bamba declared.

The Muslim Ummah also presented a special award to the Vice President for his tremendous contribution to the development of the Muslim community in Tain and the nation at large. A citation accompanying the award read in part:

“An Inspiration to the Musilm Ummah - Until your Excellency emerged onto the Ghanaian political landscape to the coveted position of the Vice President, the hope of the Muslim Ummah had dimmed and was being toyed with in a game of political ping-pong

“…The Zongos and the downtrodden shall forever be identify with your Excellency and the NPP for giving ample meaning to social intervention such as the Free SHS, as your commitment to the imperatives of the nation’s constitution far departing from any political gimmick.

“The people of Menji in the Bono Region and indeed all the Muslim Ummah pray fervently for your Excellency and your government success in the commitment to uplift our deprived communities to a shared and equitable national development.”

Vice President Bawumia expressed his appreciation to the chiefs and people, and pledged to work even harder to help fulfil President Akufo-Addo’s vision for the nation. 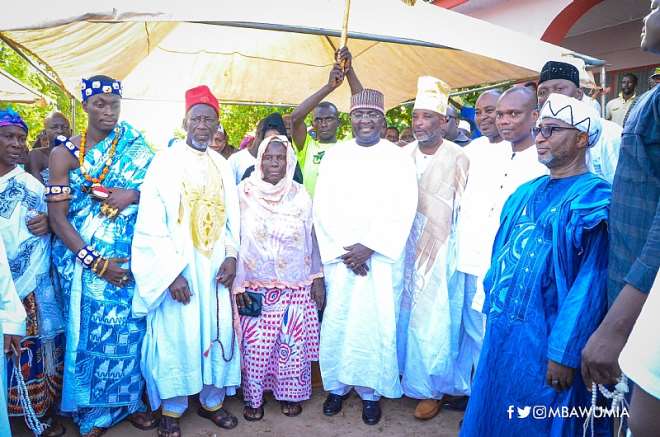