Vegan Recipes: Savoured For Centuries In The Middle East 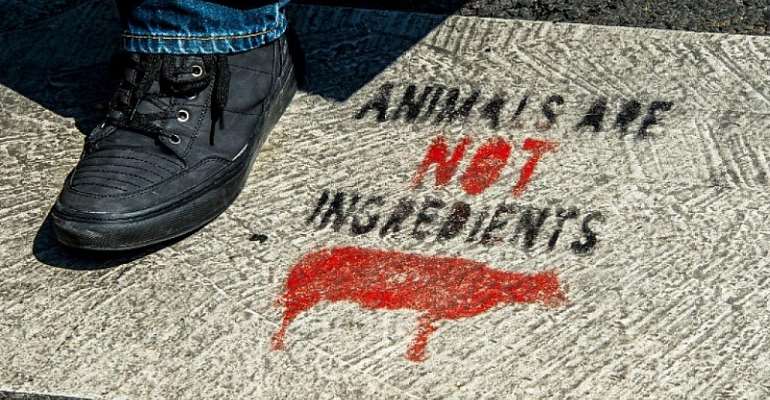 Going vegan may sound like the latest food fad, but in reality, it's a diet that has existed for centuries in the Middle East. It means eating entirely plant-based foods. So no dairy, no eggs and definitely no meat.

Many claim going vegan is the healthiest diet around and it's growing in popularity.

Others follow it for ethical reasons out of concern for animal welfare.

In fact, in a recent report by the Vegan Society the demand for meat-free food increased by 987 percent globally in 2017 alone.

The Vegan trend quadrupled between 2012 and 2017 according to Google searches, and it now gets almost three times more interest than vegetarian and gluten free searches.

Many people are put-off by the word 'vegan', because many of the dishes try to replicate animal-based products, such as texturized soya for meat, or meals full of tofu.

But over in the Middle East, going vegan is nothing new.

People in the region have been knocking back vegan meals and snacks without even knowing they were ahead of their time.

“Some of my most favourite foods that come out of Egypt are actually the vegan foods” says Brenda Abdelall who runs the culinary blog MidEats that brings the foods of the Middle East to people all over the world.

Many of the vegan foods you know of likely come from the Levant, which refers to Lebanon, Syria, Palestine, Israel, and from Egypt as well.

Unlike the Arabian Peninsula which is entirely desert, these areas are fertile and rich in vegetation. Vegetables native to the area grow in abundance.

As do pulses such as fava beans, lentils, chickpeas, all found across the region.

Lentils originate from the Near East and the Mediterranean regions. They have been around for so long because they are easy to grow, especially in sandy soil and sun.

They are easy to prepare and above all fill you up enormously.

In fact lentils have been found in archaeological digs dating back 8000 years BC and in Pharaohs' tombs. They've also featured in some in Biblical stories.

We could write pages and pages on the different vegan dishes from the Middle East, but to make it simple, we'll look at three countries: Egypt, Lebanon and Yemen.

So let's start our culinary tour in the land of pharaohs, with a popular meal called Koshary that's often referred to as the national dish of Egypt.

It's street food. This means it's primarily found in abundance in urban areas. It's cheap and it fills the stomachs of the poor.

And it has just four basic ingredients rice, brown lentils, macaroni and onions.

But origins aside, it's loved by all. Even those who don't even know they are downing some vegan food.

And it's not a typical dish across the Middle East says Abdelall. In fact “it's origins are actually from an Indian dish called Kichiri, and it's fascinating when you sort of track the evolution of the dish and how it ended up becoming what it is” she says.

In fact most of the ingredients in Koshary are not native to Egypt.

It likely made its way from India up the horn of Africa into Egypt where there was already a broader Mediterranean influence.

So Egyptians began adding marcaroni on top, followed by a sort of spicy tomato sauce that is cooked and simmered in vinegar that gives it a nice tang. People add different spices to it make it more or less hot depending on how much you like it and [its] topped with crunchy onions”.

It also made it way into Egypt through trade and colonization given its not a dish that goes back centuries.

To understand it, we need to think back to the time of British Colonization.

The British army had been living in India since the late 1700s, they then came to Egypt in the late 1800s. As Abdelall mentioned, it is an Indian street food that the British army took a liking to; probably because it is cheap, very filling, and above all safe to eat.

Now over to the Levant, and specifically Lebanon that is the source of many popular dishes both within and outside the region.

During the 15 year civil war, from 1975 to 1990 Lebanese emigrants departing Lebanon took their culture and food with them all over the world.

And with that came a mass appreciation of their cuisine, much of which is vegan.

The Lebanese community turned the world to the wonders of “their very popular falafels and mujadaraas, the taboulis (parsley salad) and the fatoushes, all of that” explains Abdelall.

Taboulah, fatoush, hummus, these all make up the mezze, or salads, the starters.

Falafel is also proudly made across the region in Syria and Israel, but it's in Lebanon where it developed its famous reputation.

It is a fried fritter of crushed chickpeas seasoned with local herbs, such as parsley, dill, or coriander; all native to the region.

The chick pea itself is native to the Levant.

If you cross over to Egypt, you'll find the same fritter but with fava: the popular indigenous beans.

The falafel is packed with vegan goodness: the chickpea provides flavour and protein, the vegetables that accompany it give flavour and substance topped off with some tahini, crushed sesame sauce, and all of this is wrapped in fresh bread.

Now sesame is one of the oldest crops and likely originates from India and the sub-Sahara. So through trade it has made its way into the Middle East where it remains a staple condiment.

Tahina coupled with falafel makes it a simple street food that you can get readily and cheaply, which is key.

It's also easy to replicate outside the country making it a favourite amongst people across all cultures.

We end our tour of the region's best vegan foods in Yemen.

At the start we mentioned that there isn't much vegan food on the peninsula given it's primarily desert.

But Yemen is different.

Its mountainous landscape provides a large number of microclimates that have created different methods of water conservation and seed adaptation unlike anywhere else in the world.

Its most common crops are cereals such as millet, corn, wheat and barley.

Their most popular dish, Aseed (or Aseeda) is their version of a dumpling, but it's made with wheat flour, corn flour, and millet flour.

In short, it's a high carbohydrate packed dumpling that is eaten by hand communal style. It's eaten savory or sweet.

Once the dough is prepared and cooked, it's shaped into a giant thick pancake and an indentation is made in the middle where honey or vegetable sauce is poured on top.

A side dish of fenugreek sauce is usually prepared as well.

So while Westerners continue to jump onto the vegan bandwagon, it's the people across the Middle East who have been the dietary trend-setters without even knowing it.