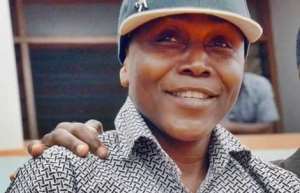 Alarmed & suspicious of the state's sinister intention to kill Gregory Afoko, his family have petitioned international human rights agencies, religious bodies & the diplomatic corps as well as the parliament of Ghana to ensure Gregory’s life is protected and the court order complied with immediately.

Mr Gregory Afoko’s Family is so alarmed by events, that they are appealing to local & International organisations to ensure Gregory's human rights are respected and his life protected.

Mr Gregory Afoko was granted bail by the high court over three (3) months ago but the Police Service has refused to respect this court order with impunity.

Reasons why the family believe that there are attempts to kill Gregory before handing him over to the family are founded on the series of events since he was granted bail;

(i) Gregory’s continuous detention in BNI cells, contrary to the court order granting him bail.

(ii) The blood samples drawn from a healthy Gregory against his will whiles in custody, hours after which he was told they had detected an infection and immediate treatment suggested for him.

(iii) None of Gregory’s lawyers or family members, and not even Gregory himself was told what infection he has.

(iv) The family have not been told which medical Doctor diagnosed this "mysterious infection" and prescribed the "mysterious treatment".

The family's fears were heightened when just a few days ago, Gregory was hurriedly rushed to the Police Hospital for another treatment without his knowledge or approval, until upon reaching the hospital. Gregory’s refusal and insistence to be made aware of whatever infection he is said to have and what the treatment was, led to the intervention of the hospital Administrator to calm an agitated Gregory, and the timely arrival of his family members and lawyer at the hospital saved him from being forcibly treated.

Gregory was therefore returned to the BNI cells in chains and under heavy guard.

The family has therefore posed these questions; 1. Why is the State bent on treating Gregory for a "mysterious infection" they won't disclose to any of us?

2. Why don't they just release him to his family who can give him the best care in terms of thorough medical attention?

3. Do they want to kill Gregory before handing him over to the family?

This strongly held suspicion is what has led to their petitioning of Amnesty International, the Diplomatic Corps, CHRAJ, and various human rights institutions to quickly intervene before Gregory is murdered by state actors.

This petition seeks to outline events leading to the arrest of Gregory Afoko for the alleged murder of Adams Mahama, the former Upper East Regional Chairman of the New Patriotic Party (N.P.P.) the present ruling party in Ghana, the trial, the motive alleged by the prosecutor, the interference by the NPP in the trial through Lawyer Anamoo, the current Upper East Chairman of the NPP, the abuse of the legal process and bureaucracy to detain and deny Gregory Afoko of his basic human rights, the abuse of the police service towards Gregory Afoko and the total disregard of the Judicial decisions. How all this is done simply to settle political scores within the in-fighting of the NPP using an innocent Proxy - Gregory Afoko.

At dawn of May 21, 2015, Gregory Afoko was arrested at his house while in bed in the same bedroom of his bedridden ailing father (whom he was taking care of). During the time of his arrest, the house was searched, clothing seized and his personal bedroom sealed by the police officers (names can be provided if needed), two other suspects were named. Gregory was sent to Tamale police station and his statement was taken (He did not write it). He was not allowed to correct the written statement. From there he was transferred to Accra and charged with the murder of Adams Mahama. One of these suspects fled and the other who allegedly bought the acid which was the substance poured on Adams was let go by the police because they had no such evidence. Gregory was eventually sent to Nsawam Medium Security prison while awaiting trial. During this time Gregory suffered various ailments and had to undergo surgery. This was only possible through judicial intervention. Due to delays by prosecution and other reasons, he has been in detention for over four years. During this time while the trial was ongoing his attorney applied for bail, but was denied by the trial judge.

After four years of detention and trial, several witnesses examined and crossed examined, after several pieces of evidence presented to a jury, after both the prosecution and defence resting their cases, the Attorney General filed a nolle prosequoi to discontinue the trial before the judge could direct the jury to deliberate. Without direct knowledge of the Judge, without following the procedures for releasing detainees, the police went to Nsawam prisons and forcibly removed Gregory from the custody of the prison (who incidentally also didn’t have the proper documentation to release Gregory but were ordered to do so verbally) in his boxer shorts at night and sent to the cells of the Bureau of National Investigation (BNI). Even though the Police and the prosecutors knew Gregory had attorneys on file representing him, they arraigned him before a different court and charged with the same offenses. The only difference was the addition of the fugitive suspect.

Incidentally, the allegations the prosecutors presented during the aborted trial was that suspects Gregory Afoko and the fugitive, stopped the deceased around 11pm at the Bolga-SSNIT flats (no one was witness to this and there was no testimony that Adams told anyone this) and had acid poured on him. The deceased then drove his car to his house screaming and strangely enough the wife came out with gloves to pull him out of his vehicle. None of the immediate neighbours heard the commotion. The deceased wife’s neighbours some houses away came to help her take her husband to the hospital, while she went back into the house to prepare herself to follow up. Whilst in the car, it was only the deceased who was praying. Only the deceased wife and her neighbours who came over to the house ever heard the deceased mention the names of the accused, this supposedly was whispered to them in the emergency room without any other witnesses but by these two. Subsequently the container in which contained the acid was identified by the wife and presented to the police, even though the alleged attack took place somewhere else without witnesses.

During the trial, the motive which the prosecutor stated for the murder by Gregory Afoko of the deceased was for political reasons. According to the prosecutor, the accused brother, Mr Paul Afoko, the then National Chairman of the NPP, was prevented from addressing party executives because the deceased believed Paul Afoko was going to campaign against the then Presidential candidate and now president of Ghana, Nana Akuffo Addo. It was this denial of Paul Afoko to address the party executives that so vexed his brother that he colluded with others to murder Adams. In fact, Lawyer Anamoo, who was mentioned earlier and is the successor to the deceased, actively solicited funds from the NPP to help the prosecutors prepare witnesses for trial. Anamoo defends his action by indicating that Adam died as a result of party activities, therefore, it is the duty of the NPP to help prosecute the accused.

The government, through the information minister held a press conference to defend the action of the Attorney General for filling the Nolle Prosequi and re arrest of Gregory Afoko by saying ‘’This has been done immediately with the objective of discontinuing the initial trial to enable the two accused persons to be tried together to best serve the interest of justice. The state additionally intends to pray the Chief Justice to assign a dedicated judge for an expedited trial considering the background of the case. Government assures all Ghanaians that it will not relent on any efforts to bring the perpetrators of crimes within this jurisdiction to book”. (Emphasis mine to highlight direct Executive / Government intervention).

In light of these new developments, filing of the Nolle Prosequi, attorneys for Gregory Afoko made a bail application to the court and it was granted with stringent conditions. In the process of satisfying the bail conditions, the prosecutors filed a stay of execution of the bail order and were denied. They repeated the stay of execution at the court of appeal and this was also resoundly rejected by the appeals court. Thereafter, the family satisfied the bail conditions despite the numerous bureaucratic obstacles thrown their way. Such as, asking for valuation two separate times, revealing the names of the sureties to the public through the media, going onto the premises of the property under false pretences to harass the property owner etc.

Despite satisfying the conditions of the bail, the police have refused to release Gregory (we have been informed informally that they cannot release him despite the court order unless they get orders from above). Gregory’s attorneys have had to file contempt charges against the police as well as a habeas corpus with the court.

With all this going on, Gregory until last week (after over two months in BNI cells) was denied visitation by either his attorneys or family. Even to present him with clothes other than the boxers he was taken with was denied until recently. Even more alarming was the fact that when the family was finally permitted to visit him, he informed them that blood was forcibly taken from him without his permission or complaint of any ailment. Subsequently, he was told he had an infection, as to what sort of infection, he was not informed but prescribed and given medication without telling him what the medication was to cure. When the family raised the alarm over this, more stringent barriers have now been put in place to make visiting Gregory more difficult.

The purpose of this petition is not to request you to interfere in the judicial process. We believe in the innocence of Gregory. We are rather concerned about the Police/Executive interference in the judicial process. We are even more concerned about the life of Gregory. Why should the police take sample of his blood for laboratory analysis when he has not complained of any ailment to them? Why should they prescribe medication for him after the so called blood analysis? Why are they refusing to let us know the medical doctor who diagnosed the ailment as well as the drugs prescribed?

Our fear was heightened by what happened to him on Wednesday, May 22, 2019. Once again without complaining of any sickness he was taken to the Police Hospital to see “a doctor”. A supposedly sick person was sent to the hospital handcuffed and guarded by eight (8) well built and well armed security men. Neither his lawyers nor relatives were informed about this. When we got wind of this and sent one of the lawyers together with a relative to the hospital to enquire about why he was in the hospital, after exchanges between the lawyer and the police officer who sent him to the hospital, he was returned to the cell without seeing any doctor.

We are appealing to you to use your good offices to ensure that the rights and more importantly the life of Gregory Afoko is protected. We believe even condemned prisoners have some rights. Gregory has not been convicted of any crime, he has only been charged with committing a crime which has not been proven