Amoateng Defended In Parliament: Innocent Until ..... 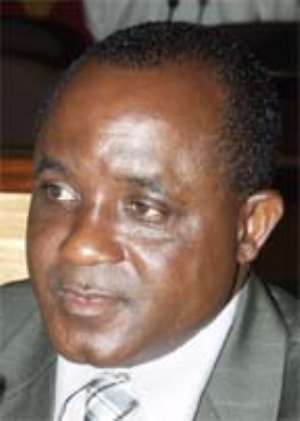 ... but did he leave without permission? Accra, Jan. 17, GNA - Mr Osei Kyei-Mensah-Bonsu, Majority Chief Whip, on Tuesday said there was nothing to show that Mr Eric Amoateng, Member for Nkoranza North, had brought disgrace to Parliament for the House to discuss it. Mr Kyei-Mensah-Bonsu said this in an interview with the Ghana News Agency in reaction to the Minority's request that the Foreign Minister, Nana Addo Dankwa Akufo-Addo should appear before the House to brief them on Mr Amoateng's arrest. "Until the case is disposed off he remains a suspect and that the allegation would have to be substantiated." He said he was also aware that some members of the Minority were saying that Mr Amoateng had been absent for 15 days and as such should lose his seat. The Majority Chief Whip explained that Mr Amoateng sought permission from the Speaker (which he did not get) to travel outside and that his arrest happened during that time so his absence was legitimate. "He is being held against his wish, so one cannot say he has absented himself from Parliament and it is unfortunate that they want to discuss his case in Parliament." Mr Kyei-Mensah-Bonsu said he had high expectation for this Session of Parliament, regarding the bills, especially the People's Representation (Amendment) Bill and the Whistle Blowers' Bill. He said Parliament intended to tackle the issues of corruption and the high rate of armed robbery and expressed the hope that they would be able to meet the targets set. Mr Felix Owusu-Adjapong, Majority Leader, said the rules of the House must be applied in the case of Mr Amoateng and that until he was found guilty it would be wrong to judge him on the floor of the House.