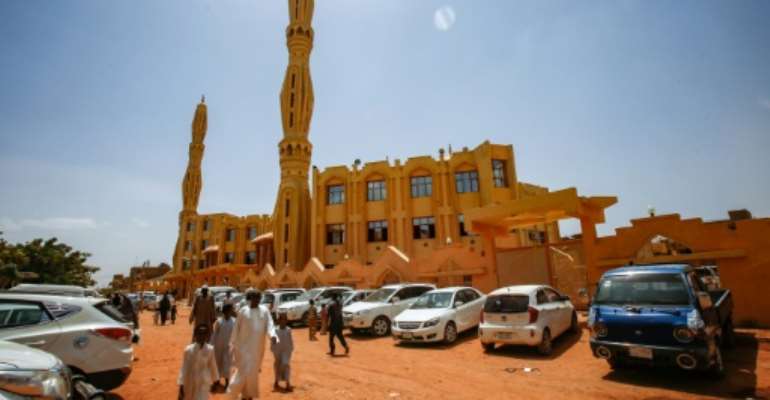 Sudanese worshippers arrive outside a mosque to attend the weekly Friday sermon and prayers during the holy month of Ramadan in the capital Khartoum. By ASHRAF SHAZLY (AFP)

With talks suspended between protest leaders and Sudan's military over a transfer of power to civilian rule, Islamist movements are backing the army in the hope it will keep sharia law in place.

Islamist parties stayed on the sidelines during the months of nationwide protests that led to the April ouster of long-time ruler Omar al-Bashir.

They have since not joined the protest alliance at loggerheads with the generals over the makeup of a new governing body, which would rule the country for a three-year transitional period.

But hundreds of Islamists have rallied in the capital in recent days, warning they would reject any deal that would exclude sharia -- Islamic law -- from the country's political roadmap.

They have also backed the army's demands that the head of Sudan's new governing body be a military figure -- putting them at odds with protesters who want civilian rule.

"We agree with (protesters) that there will be a cabinet of civilian technocrats," said Hassan Rizk, deputy head of the Islamist Reform Now Movement, a breakaway group from the National Congress Party formerly led by Bashir.

"But the sovereign council will be headed by the armed forces because there is a security problem."

Bashir came to power in an Islamist-backed coup in 1989 and Sudanese legislation has since been underpinned by Islamic law.

But the protest leaders have remained silent on whether sharia has a place in Sudan's future, arguing that their main concern is installing a civilian administration. 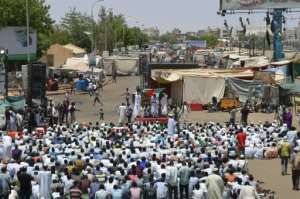 Sudan's Islamists are backing the army in the hope it will keep sharia law in place. By MOHAMED EL-SHAHED (AFP)

He used his sermon to champion Islamic law and to rail against the prospect of secular rule.

Buses then transported worshippers to a courtyard outside Khartoum's presidential palace where they broke their daytime fast for the Muslim holy month of Ramadan before rallying against the roadmap.

"Free revolutionaries will not be ruled by the forces of the left," they chanted.

Nusrat Al-Sharia chief Mohamed Ali Jazuli justified the rejection by Islamists of an "ultimatum" put forward by the protesters.

While the protest alliance could be a "partner in change", he said, it was not "the only leader of the revolution".

"The revolution was not against ideology but against corruption and tyranny," he said.

Tayeb Mustafa, who heads a coalition of conservative parties, said Islamists were opposed to the transition plan because it "ignored the application of Islamic law".

The protest alliance "stole the revolution in broad daylight", said Mustafa, whose 2020 coalition brings together Islamist groups, including the Popular Congress Party, a long-time ally of Bashir.

'Religion is for God'

Analysts say Islamists' close ties to Bashir have made it difficult for them to join forces with protesters and their Alliance for Freedom and Change umbrella group. 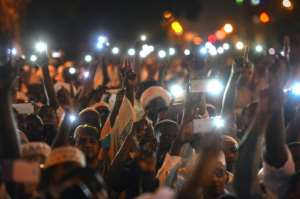 Supporters of Sudanese Islamist movements hold up their phones as they chant slogans during a rally in front of the presidential palace in downtown Khartoum. By MOHAMED EL-SHAHED (AFP)

"It's impossible to equate a party that has always been opposed to the regime with another side that was with the regime until its fall," said prominent Sudanese journalist Khaled Tijani.

"Freedom and Change therefore has the right to lead."

A few metres (yards) away from the Islamist rally outside the presidential palace, a man wearing traditional robes lit a cigarette as the call to prayer marked the end of the day's fast.

"We're fed up with the injection of religion into politics," he said in a low voice.

"We want freedom, we don't want to be ruled by anyone in the name of religion... What have we done with 30 years of that kind of rule?" he asked.

"Religion is for God, politics is for the street."

54 Nigerians Await Repatriation After Sneaking Into Ghana
50 minutes ago

Coronavirus: Some School Staffs Including 55 Students, Test ...
50 minutes ago