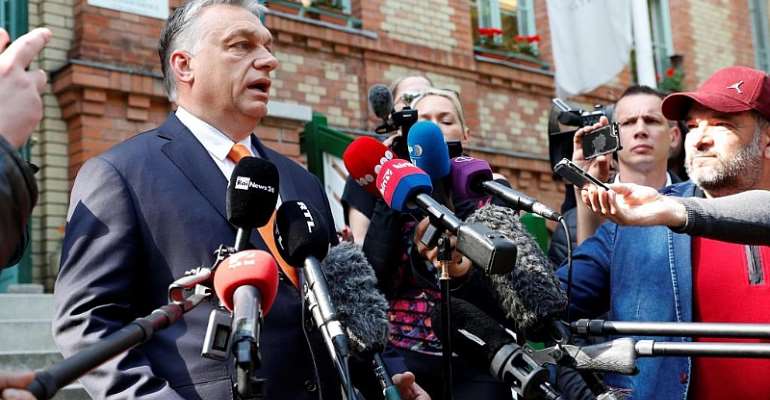 European far-right and populist leaders hailed election results on Sunday, with some calling for a common group in the EU Parliament. Turnout across the bloc was the highest in 20 years for a poll billed as a battle between populists and pro-European forces.

More than 200 million citizens across the 28-nation bloc cast their votes on Sunday for 751 EU parliament seats, with Eurosceptic forces making strong gains.

Eurosceptic parties hoped to capture as many as a third of the seats in the EU parliament, disrupting Brussels' pro-integration consensus.

French far-right leader Marine Le Pen won her symbolic duel with President Emmanuel Macron. Lead campaigner for her National Rally party, Jordan Bardella, said: “The gains for our allies in Europe and the emergence of new forces across the continent... open the way for the formation of a powerful group. "

In Hungary the Fidesz party of nationalist Prime Minister Viktor Orban looked set for a big win, with polls giving it around 56 percent of the vote, while in Poland the ruling right-wing Law and Justice party (PiS) took 42.4 percent to edge the opposition liberal coalition.

In Italy, where voting is to wrap up at 11pm, polls give the far-right League of Prime Minster Matteo Salvini more that 35 percent of the vote.

But the far-right have not had everything go their way.

The far-right Alternative for Germany took 10.5 percent, better than 2014 but less than its result in national polls in 2017.

The big winners in Germany were the Greens, with the largest share of seats in the EU parliament, doubling their score to 22 percent, in second place.

In the Netherlands, the centre-left party of EU vice president Frans Timmermans emerged a surprise comeback winner to upset the populist Eurosceptic parties.

In Austria, the centre-right People's Party of Chancellor Sebastian Kurz was on course to gain seats, with the Social Democrats in second and the far-right Freedom Party (FPOe) coming third.

The results follow a corruption scandal in the FPOe that led Kurz to dissolve his coalition with the far-right party and call early elections for the autumn.

Changing influence in European politics
Europe's mainstream parties are vying between themselves for influence over the choice of a new generation of top EU officials, including the powerful president of the European Commission.

Britain and the Netherlands were first to vote, on Thursday, followed by Ireland and the Czech Republic on Friday with Slovakia, Malta and Latvia on Saturday, leaving the bulk of the 400 million eligible voters to join in on Sunday.

The UK vote comes amid the prolonged uncertainty of Brexit, and even if Britain does finally leave the EU on 31 October, the latest deadline set for its Brexit date, its MEPs could still play a key role in the summer scramble to hand out top jobs at EU parliament.

Kufuor Recounts ‘Humiliating’ Experience As Prisoner At Ussh...
1 hour ago