Africa Union Day: My Reflection On The Youth Of Ghana 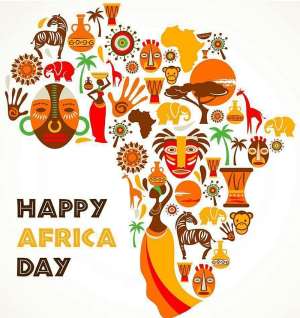 Growing up in Maamobi Zongo (urban slum), I became interested in reading the Third Universal Theory of the murdered General Muammar Gaddafi. My interest in the Third Universal Theory peaked after I read the famous ‘Green Book’, which epitomized the philosophy of Gaddafi. The book was so revealing that when a friend who borrowed it failed to return it to me, I decided to go to the Libya Culture Centre to pursue my interest in Gaddafi’s theory. So, in 2001 after finishing West Africa Secondary School, I decided to take up a study in Gaddafi’s theory. Graciously, I excelled in my pursuit of the Third Universal Theory. Today, as we celebrate AU Day, I am reminded of how Gaddafi decided to push through the frontiers AU almost singlehandedly in 2002.

As we celebrate AU Day, I have chosen to reflect on the youth of Ghana. This year has been a challenging one for Ghana, as far the youth of the country are concerned. On a daily basis, we are fed with news menu that features youth violence. On a daily basis, we read reports of youth violence across the nation. Sadly, most of the youth involved in violence are individuals who have had western education. Indeed, the anticipation of education – western and non-western – is to ensure that the educated is technically and socially fit. In sum, education is to impart technical skills and social values. Any education that is fated to make any impact must combine technical and value skills. But over the years, I have realized that the clamor for development has informed the resolve of stakeholders to emphasize technical education at the expense of the humanities.

As an aspiring social scientist, I have serious concerns about the extent to which technical education is being promoted to obscure social science education. I am convinced that no society can survive the test of time without values. It is the obfuscation of values that, I believe, is partly creating problems for the contemporary youth.

In the 1960s, many African political elites were hopeful that the youth of the continent constituted an important resource for building the continent. In fact, the struggle against the edifice of colonialism lay solidly on the back of the youth. Consequently, the postcolonial state in Africa rolled out programs that were aimed at building the capacity of the youth. Self-development programs were common in Ethiopia, Benin, Tanzania, Sao Tome and Principe, Ghana, Guinea, and Zambia. In the same way, rural education developments and cooperative programs were run in Ivory Coast, Ghana, Liberia, Kenya, and Zambia. There were also Brigades programs, which were conducted in Botswana, Ghana, Kenya, Zimbabwe, Zambia, Benin, Ivory Coast, and Mozambique. These programs were conceived as a means of providing more appropriate training to the youth. The leaders also promoted the National Youth Services scheme. Examples of these included Ghana Young Pioneers, National Youth Service Corps of Nigeria, Malawi Young Pioneers, Kenya National Service, and Zambia Youth Service Corps. The purpose of this service was to mobilize unemployed youth to undertake projects that could promote national development. They also sought to inculcate in the youth an ethos that could promote national unity, a strong work ethic, and a spirit of service.

By the 1980s, the failure of the nationalist agenda to realize the fruits of the programs they had rolled out to support the youth to contribute meaningfully to development created a new atmosphere of antagonism between the youth and the older generation. The youth were constructed as a threat to social and political order. The impact of neoliberal policies that were mandated by the Bretton Woods institutions in the 1980s collapsed the already ailing economies of many African countries. The removal of subsidies on education, agriculture, and health made life unbearable for many of the youth of Africa. Austere economic measures, such as retrenchment and placing of an embargo on public sector employment, created unprecedented joblessness among African youth. To state it bluntly, these measures pushed the youth of Africa to the false precipice of life.

In the face of all these challenges, the gerontocratic governmentality of most pre-colonial cultures in Africa has also lost its stint. Until the European interlude in Africa, the older generation had significant control over the youth. In patrilineal societies, the investment of the means of marriage (usually cattle) in the hands of the older generation ensured that they were able to control the younger generation. In the same way, in a pre-colonial world that had no clear bifurcation between the physical and metaphysical worlds, rituals constituted the main vector in bridging the two worlds. Since these rituals were necessary for keeping cosmic balance, the older generation who were ritual functionaries commanded respect from and control over the youth. Related to this, initiation rites that served as an important avenue to transmitting values and virtues from the older generation to the younger generation have also collapsed beyond recovery.

While the neoliberal economy crippled many of the youth, it created a capitalist system where individual accumulation is preferred over collective ownership of wealth. Consequently, a liberalized economy space has empowered some of the youth more than the older generation, who lack the skills to compete in the modern economy. The fallouts of a capitalist economy have created online scam (known as Sakawa in Ghana); it has also created deep-rooted commodity fetishism. Money is valued over social virtues. A young man, who lacks the canons of social values and yet has money, is more respected than an elderly person who lives on shoestrings. In effect, the older generation has developed an unmitigated pessimism about the youth.

Since the Fourth Republic, politicians, to cause mayhem, during elections have instrumentalized the energy of the youth of Ghana. The phenomenon of ‘Foot Soldiers' which supposedly metamorphosed into political vigilantism created yet another avenue for the youth of Ghana to be suspected. Certainly, political vigilantism itself reflects the political party organization in Ghana. In Ghana, the youth are at the base of the political organization. Their energies, not their brains, are needed to push politicians into high office. Even so, the idea that ‘job for the boys and girls’ never works in the interest of the youth. In the end, the anxiety of the youth continues unending.

Recently, many of the youth have taken to education. It is now common to find youth who have completed tertiary education. The absence of jobs is also pushing more of the youth to pursue postgraduate education to while away time (and in some cases add value to themselves). While this portends some positive values to Ghana, there is no equivocation that highly educated youth without any job prospects is a gapping threat to the stability of Ghana. Currently, we have cases where some youth with postgraduate degrees are doing jobs fit for secondary school graduates. Sadly, many of the youth Ghana are beginning to see the fruitlessness of university certificate. Some with sophisticated knowledge have begun pushing drugs and also dabbling in all forms of antinomian practices!

Some of them are also voting with their feet. They dare the consequences of the desert and the Mediterranean Sea to cross over to Western Europe. In Europe and North America, many of them spend hours working in difficult conditions to earn peanuts. In no time, many of the youth quickly realize the illusions of casting a heaven-imagery of the developed world.

While at Basic school at Kotobabi Presbyterian Primary School, we learned a song about the youth. It was supposed to be a patriotic song: