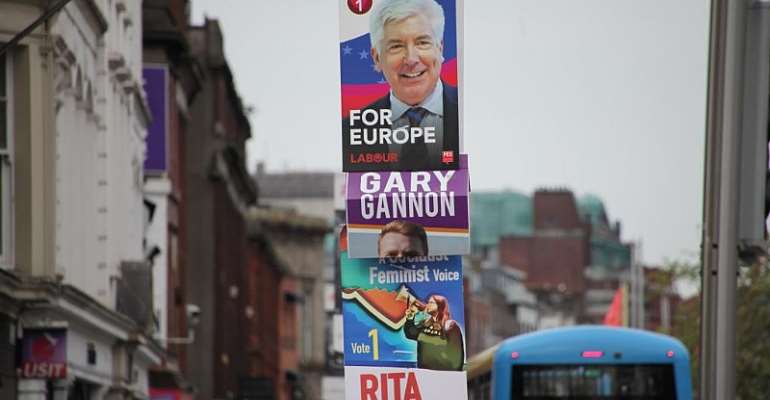 Ireland and the United Kingdom have already voted in elections for the European parliament. All eyes are now on how national and local politicians will deal with the Brexit agenda that's been dominating debate in both countries for the past three years.

“It's a typical conversation that occurs every day,” says Emma Coffey, a councilor for the center-right Fianna Fáil party in the Irish town of Dundalk, just kilometers from the border with the north. "People are worried." Her party wants more clarity about the implications of a “hard border” between the Irish Republic, which is remaining in Europe, and Northern Ireland, which is leaving with the rest of the UK.

Cross border business contacts are affected by the uncertainty surrounding Brexit, and policy decisions are being postponed.

Uncertainty eats into the minds of people in Dundalk who have children going to schools in the north, or others who benefit from health care under regulations that allow citizens of different member states to enjoy care in other EU countries.

“I don't think they're concerned about us over here on the border, says Anne Marie, a resident of Crossmaglen, a small town in Northern Ireland just four kilometers from the border.

“They're just thinking about 'mainland England' themselves. They don't seem to worry how it's going to impact us, just living right on the border."

Winners and losers in the Brexit breakdown

“There are of course factors which are going to benefit Ireland because of Brexit,” says Federico Fabbrina, director of the Brexit Institute in Dublin, pointing to the financial services sector where “Dublin is becoming an attractive capital to replace London” and higher education, where Irish universities are likely to gain as fees at British universities become less competitive

The Brexit Institute is the world's only think tank with the sole concern of studying the possible impact of the UK's departure from the EU.

“But clearly, Brexit is also going to be very damaging for other sectors of the Irish economy,” warns Fabbrina. Agriculture and foodstuffs, which rely on an integrated supply chain with the United Kingdom will suffer, “not to mention transport and trade since ultimately the UK serves as a land bridge through which Ireland is able to access the European market.”

Grim view of the political classes

Far away from the think tanks of Brussels and Dublin, residents directly affected by the looming Brexit have become increasingly skeptical.

A fish seller at the early morning market, who wants to remain anonymous because his “boss wouldn't like” the publicity, says that he and some of his colleagues initially supported Brexit.

“We thought we'd get back our fishing rights,” he says.

But things don't seem so clear anymore. “Nothing is certain now,” and he's reversed his stance, and wants the UK to remain inside the EU.

In the minds of many in the northern counties of the Irish Republic and their brethren in Northern Ireland are the “troubles”, the violent incidents that marked nearly three decades of civil war.

Will Brexit lead to a new round of Troubles?

The open border between the north and the south, along with EU subventions, were among the main factors that helped to bring peace to the region.

“The thing is that you will see some kind of border structure, if we have a hard border eventually going up, that will lead initially probably to some civil disobedience,” says Gary Stokes, a councilor in Newry, a town just to the north of the border.

“History has a habit of repeating itself. When the modern troubles started in the early 1970s, it started with civil disobedience, with one young man who blows up a camera or some kind of structure at the border.

“And we will end up with organisations, effectively at war with each other."

But he remains optimistic: “It is unthinkable that we will let history repeat itself,” he concludes.

Emma Coffey agrees, but strikes a note of caution: “I think what we need to do is prepare for the worst and try for the best possible outcome,” she says.