Ken Calls For ECOWAS Beyond Aid 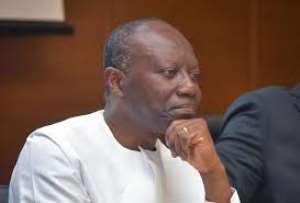 The Finance Minister, Kenneth Ofori Atta at the inaugural meeting of the Association of Auditors General of West Africa has called for help to establish an ECOWAS beyond aid.

He said there is a challenge in illicit financial flows on the continent with about 50 to 70billion dollars lost a year which is more than the aid given to Africa from the western countries.

"We must be able to create a self confident society leveraging on our resources effectively so that we'll create a society where there is social justice and there is access for all and it's prosperous. And we do have the resources to do that. This is where auditors come in to make sure the resources are well used," he intimated.

Present at the inauguration was the President for the Commission of Economic Community for West African States, Mr. Jean-Claude Kassi Brou.

Addressing auditors from various countries in West Africa, said performance of economies depend a lot on the ability to follow rules and compliance.

"Each member constitute of ECOWAS as specific organisation, auditor general to follow that and make sure that public money is well mobilized and well spent, " he said.

Speaking on terrorism and extremism threats in West Africa, Mr. Jean-Claude Kassi Brou, said security has moved from a national issue to a regional issue.

"ECOWAS is working to make sure that we have in place the proper program to really deal effectively with this issue," he intimated.

Reopening Of Schools: Not Testing Students, Staff Dangerous,...
49 minutes ago