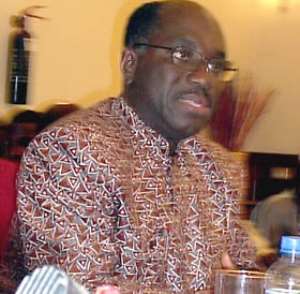 ...Alexanderia in town to testify Road Transport Minister, Richard Anane will today appear before the Commission on Human Rights and Administrative Justice (CHRAJ) to defend charges of corruption and conflict of interest leveled against him. Dr Anane is being investigated by CHRAJ, for allegedly transferring over $90,000 to his American mistress, Alexandria O'Brien with whom he has a son, Nicholas Anane. He is also being accused of using state facilities for his personal gain.

According to pro-NPP newspaper, Daily Guide, the minister would be accompanied by not less than five lawyers.

Parliament had earlier on exonerated Dr Anane, who is also the MP for Nhyiaso on similar charges during his ministerial vetting last year.

Head of the Public Relations Unit of the ministry, Ken Anku, says minister Richard Anane is ready for CHRAJ even though he does not understand what the commission meant by 'panel enquiry' as contained in the letter inviting the minister to appear before it.

CHRAJ had written to Dr Anane on Thursday December 1, 2005 to appear before a panel of enquiry on January 10,2006 over allegations of corruption and conflict of interest.

However, January 10 2006 was a public holiday necessitating the change of date.

The Commission says it needs to extend the scope of its investigations into the allegations after its preliminary investigations.

The minister was said to have transferred $90,000 to his mistress, Alexandria O'Brien for the upkeep for his son, Nicholas.

He is also accused of using state facilities for his personal comfort, especially when he travels abroad.

Dr Anane was accused of billing Ghana Civil Aviation Authority (GCAA), an agency formerly under his ministry, when he attended an International Civil Aviation Organisation (ICAO) meeting in Montreal, Canada between September and October 2004.

At the meeting Dr Anane was said to have been joined by Alexandria and Nicholas in his hotel room at Fairmont Hotel.

Ms Alexander O'Brien (a.k.a. Alexandria Anane), who has disclosed the transfer of various sums to her by the minister from sources that are not too clear, would be making an appearance.

Alexandria had accused Dr. Anane of abandoning her and their son, after he had initially been supportive of her, following an encounter with Anane's wife.

According to Ms O'Brien she had kept all documents in respect of monies she had received from Dr. Anane.